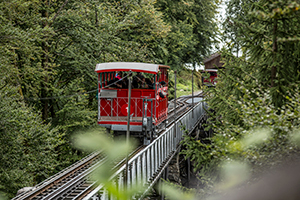 ASME honored the funicular in a dedication ceremony Aug. 27, 2015, at the Giessbach.

Opened in 1897, the Giessbachbahn funicular runs on a 363-meter track between the historic Grandhotel Giessbach and the banks of Lake Brienz.  Featuring two wooden cars dating to 1879, the funicular covers a one-way journey in five minutes.

The distinguishing technical attribute of the railway is a passing loop, or turnout, that the original engineer, Roman Abt, placed midway on the route.

“The turnout on the Giessbachbahn funicular is an ingenious element of engineering, allowing the two cars to travel to and from the hotel simultaneously and pass each other safely,” said Julio G. Guerrero, president of ASME.  “Abt’s unique passing loop influenced designs on other railway systems throughout the world.”

Other technical features of the railway include a rack rail for braking, a central axle on each car to provide stabilization, and DC electric motor that propels the cars.

Guerrero said, “ASME is proud to add the Giessbachbahn funicular to the Society’s roster of more than 255 great engineering artifacts which have contributed to our industrial heritage and to the common good.”

ASME created the landmarks program to promote a stronger public understanding and appreciation of engineering history and also to encourage the preservation of historically important works.