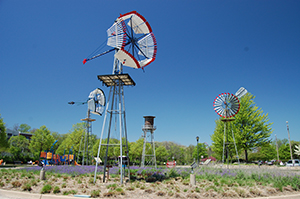 Declared historic by ASME, the American Society of Mechanical Engineers.

NEW YORK, Sept. 12, 2013 – Batavia, Illinois will celebrate its days of renown as the “Windmill Capital of the World” on Sept. 14 when the American Society of Mechanical Engineers (ASME) officially bestows the title “Engineering Landmark” upon an historic collection of Batavia’s own windmills.

Seventeen of the historic pieces of mechanical engineering, nine on display in the vicinity of the city government center, will be honored in a special ceremony in Batavia, joining more than 250 other engineering artifacts around the world -- including Paris’s Eiffel Tower -- that have been recognized as historic contributions to industrial development and progress.

All 17 windmills were manufactured in Batavia, which between 1863 and 1951 served as a major center for the ingenuity and mechanical skill that gave rise to six local windmill makers, including U.S. Wind Engine & Pump Company, which built the nation’s first mass-production facility and held 27 patents on windmill design.  Incorporating innovative design ideas for the blades and wheels, Batavia’s windmills were used to pump water for livestock and plants and also played a major role in western expansion, allowing settlements to grow beyond the confines of lakes and rivers.

“These windmills were designed for easy assembly, operation, and maintenance using only simple hand tools,” says ASME in a plaque to be presented to Batavia on Sept. 14.  ASME also cites the self-regulating capability of the systems, which automatically adjusted the wheel and blade angle to maintain constant speed and power in varying winds without the intervention of an operator.

The 17 windmills being honored were collected from sites around the country during a local drive themed “Bringing Them Home,” begun in 1994.  All 17 are authentic reconstructions carried out by local enthusiasts and windmill repairmen.

Representing ASME at the Sept. 14 ceremony will be Victoria Rockwell, a past president of the Society, and Thomas Fehring of the ASME History and Heritage Committee.

About ASME
ASME helps the global engineering community develop solutions to real world challenges. Founded in 1880 as the American Society of Mechanical Engineers, ASME is a not-for-profit professional organization that enables collaboration, knowledge sharing and skill development across all engineering disciplines, while promoting the vital role of the engineer in society. ASME codes and standards, publications, conferences, continuing education and professional development programs provide a foundation for advancing technical knowledge and a safer world.