Aug. 24, 2018 – As the kickoff event a day prior to ASME’s first E-Fest South America in late July, the Society held an afternoon symposium, the ASME Leadership Summit Brazil 2018, to help improve communication and collaboration between industry and academic institutions in Brazil. The event featured presentations from executives of several Brazilian companies and heads of academic institutions, followed by a lively panel discussion. During the forum, ASME also signed agreements with two prestigious Brazilian engineering organizations. 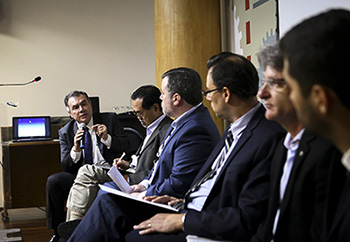 (Left to right) Marcelino Guedes F.M. Gomes of Petrobras Transporte S.A., Edson Watanabe of the research and learning center COPPE, moderator Jay Carreiro from the U.S. Consulate, Idarilho Nascimento from Tenaris, Domingos Rade of the Brazilian Association of Engineering and Mechanical Sciences (ABCM), and Fernando Garcia, an engineering student at UFRJ who was the lead student volunteer for this year’s E-Fest South America, discussed the subject of collaboration between industry and academia at the ASME Leadership Summit Brazil 2018. The Leadership Summit, which took place July 26, prior to the inaugural E-Fest South America in Rio de Janeiro, was organized in cooperation with the Brazilian Association of Engineering and Mechanical Sciences (ABCM), the Clube de Engenharia, and the U.S. Consulate Rio de Janeiro. The event was conceived last year when ASME staff visited the country and had the opportunity to speak to industry executives, department heads and officers at the U.S. Consulate.

It became apparent, during the conversations, that the existing state of collaboration between industry and academic institutions in Brazil is having a negative effect on the country’s future workforce, said John Falcioni, the senior director of media, content and strategic relationships for ASME who also spearheaded the organization of the Summit.

“Since we were in Brazil to put on our first ASME E-Fest event in South America, we felt it was important for ASME to convene a meeting of leaders of these two segments,” Falcioni said. “In the end, it’s about creating the best trained engineering workforce. Getting industry and academia to talk first and then collaborate helps in this goal.” 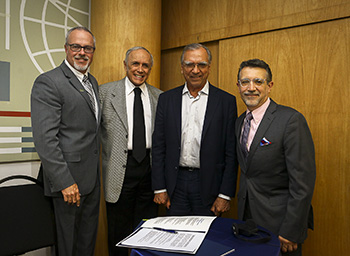 To this end, the Summit’s organizers invited an impressive group of representatives from the country’s leading companies and universities to give presentations and take part in a panel discussion focusing on improving communication between the two sectors. These speakers included Marcelino Guedes F.M. Gomes, advisor to the president of Petrobras Transporte S.A.; Domingos Rade, scientific technical director, ABCM; Idarilho Nascimento, commercial director at Tenaris; and Edson Watanabe, director of COPPE, a research and learning center in the Center of Technology of the Federal University of Rio de Janeiro (UFRJ). Fernando Garcia, an engineering student at UFRJ and the lead student volunteer for this year’s E-Fest South America, also participated, adding the perspective of the country’s future engineering professionals to the conversation.

Characterizing the conversations that took place during the Summit as “sincere, sometimes difficult, but effective,” Falcioni went on to say that the discussion proved productive. “There was a lot of discussion about the ‘system’ in Brazil, especially as it impacts federal, or public, universities — the impact on professors, the difficulties of industry investment, and the nature of R&D in Brazil,” he continued. “The participants agreed they would continue to talk and try to resolve some of the differences. Much of the lack of communication is a result of the way things have always been. It’s important to think differently, offer a new script for how things should be. Everyone appreciated that.” 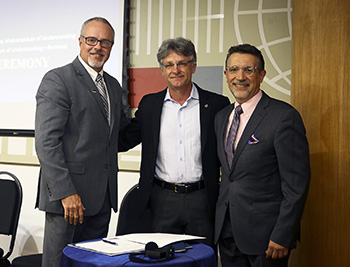 Domingos Rade (center), scientific technical director at ABCM, joined ASME’s Paul Stevenson (left) and John Falcioni for the signing of renewal of a Memorandum of Understanding between the two organizations at the ASME Leadership Summit Brazil 2018.
During the event, ASME also signed a Memorandum of Understanding with the Clube de Engenharia, which represents industry executives in Brazil, and renewed an existing agreement with ABCM, a leading academic organization representing engineering and science educators. Pedro Celestino, president of the Clube de Engenharia, Fernando Tourinho, technical director for the Clube de Engenharia, and Rade represented their organizations at their respective signings. In addition to Falcioni, Paul Stevenson, immediate past senior vice president for Student and Early Career Development, and Aisha Lawrey, director of Engineering Education, spoke on behalf of ASME. To watch a video of the ASME Leadership Summit Brazil 2018, visit https://drive.google.com/open?id=1il6spTJ5HIrp_RS-FPg0EEDd-LwxoJuo.