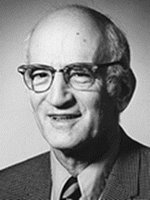 This award is named after former chair of the petroleum division and former member of the ASME Board of Governors, Karl Geoca. Karl was a skilled engineer, successful entrepreneur, savvy investor, and committed volunteer. He graduated from Clarkson College and joined the U.S. Navy, ultimately reaching the rank of Lt. Cmdr. Karl worked at Shell Oil Co. for 40 years, where he was known for foresight, skill, and mentorship. After retirement from Shell, Karl and his son Tom took over and built-up South Coast Hydraulics. Established in 1965 as an extraordinary award for distinguished and meritorious achievement or service in the field of petroleum mechanical engineering.