History of the Hoover Medal 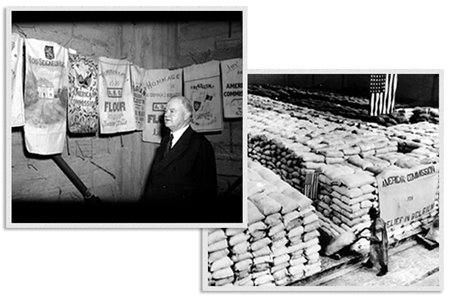 Herbert Hoover (above) led the effort to feed millions of Belgian and French refugees during World War I. His efforts made shipments of food and supplies (below) possible, saving countless lives in war-torn Europe. Photos: Courtesy of Hoover Archives
Outstanding achievements in engineering and the sciences have long been recognized by the awarding of a number of highly prized medals.

It was not until 1929, however, that a fund was established in support of a gold medal "to recognize outstanding civic or humanitarian service rendered by a member of the profession."

The donor, Conrad N. Lauer, was inspired by the extraordinary relief services accomplished by Herbert Hoover and a group of engineer associates during the nine years 1914-1923, the period of World War I and its aftermath. As described by Professor Arthur Link of Princeton in 1988: ...

[Several Belgians] organized the Comit Central d'Alimentation...in Brussels in September 1914, but it faced a hopeless task in a country denuded of food. Food had to come from abroad and quickly, and the Comit...appealed to London...[A]s a belligerent, [Britain] could not operate in German held territory. It turned to the American Ambassador in London, Walter Page, and he, in turn, appealed to Hoover [who had earlier directed aid in China in the Boxer Rebellion]. He came forward with a plan, won the approval of the British and German governments and launched it...[in October 1914].

...[It] turned out to be the best-organized and executed relief operation in history. Hoover knew exactly what had to be done and proceeded to do it in spite of numerous obstacles. He forced the British, French and German governments to cooperate by threatening to dissolve the [Comit]; neither side was willing to take responsibility for what would otherwise have been a genocide unparalleled in modern history...[The Comit] bought the food, transported it to Rotterdam in its own chartered ships, and oversaw its processing and distribution to some 7 million Belgians and 2 million French people in...northern France.

Mr. Lauer nominated Herbert Hoover, then President of the United States, to be the first recipient of the Medal which bears his name. The presentation was in April 1930 on the occasion of the Fiftieth Anniversary of the American Society of Mechanical Engineers. In the 84 years of the Medal (1930-2014) it has been awarded 66 times.