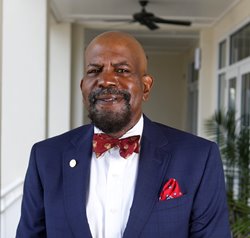 Cato T. Laurencin, M.D., Ph.D.
Cato T. Laurencin, M.D., Ph.D. is a chemical engineer, an orthopaedic surgeon and a materials scientist. Born in North Philadelphia to parents who stressed the philosophy of mind and hand, he has been regarded as the world’s foremost engineer-physician-scientist. He is the University Professor and Albert and Wilda Van Dusen Distinguished Endowed Professor of Orthopaedic Surgery at the University of Connecticut.  He is Professor of Chemical Engineering, Professor of Materials Science and Engineering, and Professor of Biomedical Engineering at the school. He has served as the Chief Executive Officer of The Connecticut Convergence Institute for Translation in Regenerative Engineering.

Dr. Laurencin is the recipient of the National Medal of Technology and Innovation, America’s highest honor for technological achievement, awarded by President Barack Obama in ceremonies at the White House.

Dr. Laurencin’s life and career have been rooted in social justice and equity. His philosophy on diversity and its context in the pursuit of social justice and equity was published in Science (Laurencin, C.T. (2019).  The context of diversity. Science 366(6468): 929).  Not only is he a celebrated engineering professor, but he is core faculty member of the Africana Studies Institute at the University of Connecticut. He has been a scholar in discussing issues involving health disparities and social justice, most recently publishing the first peer reviewed article on COVID-19 and Black Americans (Laurencin, C.T. and McClinton, A.: The COVID-19 Pandemic: A Call to Action to Identify and Address Racial and Ethnic Disparities.  J. Racial Ethnic Health Disparities, DOI: 10.1007/s40615020-00756-0).  Dr. Laurencin has had a 40 year history of working to promote social justice and equity through education, mentoring and other direct societal action. He is the first individual to receive the three principal honors for mentoring in the United States: the Presidential Award for Excellence in Science, Math and Engineering Mentoring from President Barack Obama, the Elizabeth Hurlock Beckman Award for Mentoring, and the American Association for the Advancement of Science Mentor Award. It should be noted that in receiving the AAAS Mentor Award it was stated that he was the main individual responsible for mentoring a generation of underrepresented Biomedical Engineers in our nation.

His work began on entering the Harvard Medical School for his M.D. and the Massachusetts Institute of Technology for his Ph.D.  During his early years in the 1980s and early 1990s, his impact was broad. He saw the need to create a space for the Boston minority scientific community to discuss research and to create a system for support. He cofounded the Hinton-Wright Scientific Society in 1983. On the Harvard college campus, the Harvard Summer Health Professions Program served to educate and mentor minority undergraduate students. He served as Assistant Director overseeing the educational aspects of the Program. On completing his M.D. and Ph.D., Dr. Laurencin opened his biomedical engineering research laboratory at the Massachusetts Institute of Technology in 1988.

There he mentored large numbers of underrepresented engineering students.  Completing his training, Dr. Laurencin moved to Philadelphia. He developed programs across the city for high school students in science. Dr. Laurencin was honored by the School District of Philadelphia with an Outstanding Achievement Award, in recognition of his mentoring efforts in the inner city of Philadelphia. With a particular interest in mentoring minority women medical students as his mother did, Dr. Laurencin established the Helen I. Moorehead-Laurencin, M.D., Foundation which awarded scholarships to minority women at Drexel University. These efforts continued with the Helen I. Moorehead-Laurencin, M.D. Sex and Gender Educational Forum at Drexel. It was in Philadelphia that he began to engage in programs of national impact.  He began an 11 year term on the advisory board of the Bristol Myers Squibb Fellowship Program in Academic Medicine which supported minority medical students entering academics through mentoring and educational research experiences. Dr. Laurencin not only provided guidance for the program, but served as an active educational mentor. His work in mentoring and developing minority students in Philadelphia earned him the Matilda Evans Award from Allegheny University in 1996.  He then moved to the University of Virginia (UVA). He created a new space to support Black and Latino engineering students. He was the first awardee of the Bland Award, named after the first Black undergraduate engineering degree recipient from UVA for his work cultivating an ecosystem for underrepresented students at UVA.  During this same time, Dr. Laurencin began to work for causes in social justice and equity at the national level. Eventually, Dr. Laurencin became a key individual mentoring Black and Latino students across the country. For his efforts he received the Percy Julian Medal from the National Organization of Black Chemists and Chemical Engineers (NOBCChe) and the William Grimes Award from the American Institute of Chemical Engineers.

Dr. Laurencin had a vision, to create a National Institute that would address Health Disparities in Underrepresented Minorities.  Inspired by the only Black M.D.-Ph.D. he had met early in medical school, he named the Institute the W. Montague Cobb/National Medical Association Health Institute. He co-founded the Institute in 2004 and served as its Founding Chair of the Board for over 12 years. As Chair, Dr. Laurencin led initiatives focused on addressing health disparities in all its forms: from the lack of Black males entering engineering and medicine, to influenza in Blacks and Latinos, to the HIV/AIDS epidemic in minority communities.

Remarkably, while Chair of the W. Montague Cobb/NMA Health Institute, Dr. Laurencin developed the concept of creating a new National Journal aimed at educating people broadly on issues of social justice and equity in health disparities. He launched, in conjunction with the W. Montague Cobb/NMA Health Institute Cobb, the Journal of Racial and Ethnic Health Disparities, and he has been the Founding Editor-in-Chief. The Journal is now regarded as the leading journal in racial and ethnic health disparities in the United States.

At the University of Connecticut, he has been active in developing programs and initiatives dedicated to social justice and equity. He founded the Young Innovative Investigator Program, recruiting Black and Latino students to UConn for two year intensive educational, mentoring and research experiences on their way to Ph.D. and M.D., Ph.D. training. He has been the site P.I. for the NIH BUILD (Building Infrastructure Leading to Diversity) Grant Program in conjunction with the University of Texas at El Paso. Under the Build Program, Latino students each year come to the University of Connecticut for intensive mentoring and research experiences. In addition, Dr. Laurencin hosted an inaugural site for the National Science Foundation Research, Education and Mentoring Program (R.E.M.). The program sees inner city minority high school students, college students and teachers come to his Institute for training in research and mentoring. Many of the high school and college students have gone on to engineering careers.  Finally, Dr. Laurencin’s belief that an inclusive environment is necessary for success led him to start the UConn M-1 Mentoring Program. The program is the first of its kind and provides protected time to senior faculty to mentor minority undergraduates, graduate students and junior faculty. In this way, a network of mentoring is created promoting inclusion at all levels.

The impact of his work has been acknowledged in a number of areas. Most recently, the University of Connecticut Foundation established the Cato T. Laurencin Scholars Award, given to the top academically achieving Black male students at UConn. It is a source of inspiration for the Black community at UConn. The W. Montague Cobb/NMA Institute and the National Medical Association established the Cato T. Laurencin Lifetime Research Achievement Award, their highest award for research, given during the opening ceremonies of the National Medical Association Meeting. The Society for Biomaterials established The Cato T. Laurencin, M.D., Ph.D. Travel Fellowship in his honor, awarded to underrepresented minority students pursuing engineering research.

Dr. Laurencin has dedicated his life to racial and ethnic social justice and equity. He has received the Herbert W. Nickens Award from the Association of American Medical Colleges which recognized his commitment to fairness and justice. He has also received the Spingarn Medal, the highest honor of the NAACP. The medal is presented for the “highest or noblest achievement by a living African American during the preceding year or years in any honorable field.”  The award recognizes Laurencin's seminal and singular accomplishments in tissue regeneration, biomaterials science, nanotechnology, and regenerative engineering, a field he founded. Previous Spingarn Medal recipients include George Washington Carver, Jackie Robinson, Martin Luther King, Jr., Duke Ellington, Rosa Parks, Charles Drew, and Maya Angelou. He is the first engineer to receive the Spingarn Medal in its 106 Year History, and it is reflective of both his trailblazing work in engineering and science, and his commitment to ensuring a better world. He has been a mentor to generations of individuals who continue to pass on his lessons. He is an innovator in social justice, creating new programs directly impacting racial and ethnic underrepresented individuals both locally, nationally, and internationally.