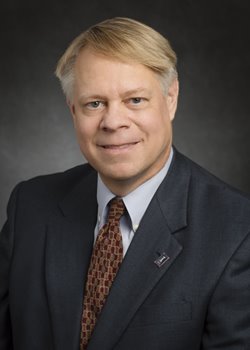 William S. Hammack
Bill Hammack grew up in Mt. Pleasant, Michigan, a small college town in central Michigan. His first taste of engineering was on family vacations. Wherever his family vacationed, his parents, a botanist and a theater professor, organized factory tours: With his siblings he watched spellbound as a Canadian factory sliced tree trunks into lumber, or at a plant in California that poured corn into thousands of cans a minute, and he held his nose in the putrid air of a Kellogg’s cereal factory in Michigan.

In the fall of 1980, he enrolled at Michigan Technological University in the Upper Peninsula of Michigan. At Michigan Tech he earned a B.S. in Chemical Engineering, then attended the University of Illinois at Urbana-Champaign where he earned a M.S. and Ph.D., also in Chemical Engineering, under the guidance of Harry Drickamer.  He has been a professor teaching engineering for over thirty years — for ten years at Carnegie-Mellon in Pittsburgh and the remainder at the University of Illinois at Urbana-Champaign.

As a professor, he learned that few members of the public really understood how engineers think: their cloudy vision of an engineer arising, paradoxically, from the success of engineering because the hallmark of good engineering is invisibility — we rarely think of our furnace, or a jet’s engine, or the purity of a pharmaceutical because the methods to manufacture all these have been honed to perfection. While the products of engineers shouldn’t clamor for attention by failing, why was the thought of engineers invisible?

In a search of answers, he absorbed the work of writers thoughtful on engineers and engineering: Henry Petroski’s stunning The Pencil: A History of Design and Circumstance, Samuel Florman’s revealing The Existential Pleasures of Engineering, and an early version of Billy Vaughn Koen’s audacious Discussion of the Method — audacious because he claims the engineering method is the universal method, the way to all knowledge. Buttressed by these foundations, as he neared his tenth year as an engineering professor, he focused his career on explaining engineering to the public, to reveal the dazzling creativity of engineers.

For nearly a decade he broadcast commentaries on public radio. To succeed in radio, he fused the intellectual inheritance from his parents. His mother, trained as a botanist, delighted in revealing to him and his siblings the natural world. On walks through the nearby woods, she identified trees, plants, and animals, which transformed what was to Bill a brown and green patch of land into an evolving, dynamic ecosystem filled with hidden treasures and delights — an analog for revealing the hidden world of engineers. Bill combined his mother’s powerful example of explanation with his father’s passion: theater. His greatest impact on Bill was highlighting that to create something for public consumption you must hone your craft. A vivid childhood memory is of him preparing for a play. He would lay out a sheet of white paper on which was carefully sketched an overhead view of the set, then, using pennies and dimes to represent the actors he would work out in detail the “blocking,” the movements of the actors. The attention to craft is apparent in Bill’s work:  the clear shaping of a message, the camera shot that tells, the image that reveals, the words that clarify and enlighten.

On a leave of absence in 2005, Bill worked as a senior science advisor at the State Department in Washington, DC., where he spent his free time learning about what was then called “new” — what anyone born in the twenty-first century elides to just “media.” While in DC he learned the essential, disruptive principles undergirding these new technologies: that now an individual has the means of production. In the past, to film would have cost $100,000, but was now so cheap that the only real cost was time. And the new revolution swept aside gatekeepers that controlled distribution — at television networks, radio stations, and theaters — to one where anyone could broadcast.

Understanding this foundation, Bill, on returning to the University of Illinois, moved into video production. He created a successful YouTube channel that has reached millions of viewers. Through his videos he has celebrated the often unheralded, often hidden intellectual triumphs of engineers who create the world around us. The videos demonstrate to the public that engineering is a creative profession, one that surpasses all other human endeavors as a demonstration of the supreme suppleness of the human mind.