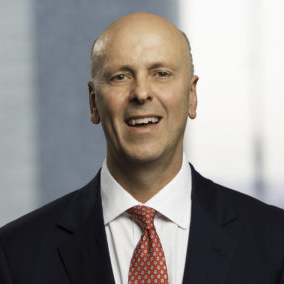 David Baldwin
David Baldwin, who was born in Greenwich, Connecticut, on Feb. 22, 1963, chose to follow his father’s career path. He earned a Bachelor of Science in Petroleum Engineering in 1985 at The University of Texas at Austin (UT). While at UT, David played baseball and was a member of the Longhorns’ 1983 National Championship Team.

Upon graduation, David joined Union Pacific Resources (UPRC), one of the oil industry’s most innovative companies of its time. During the bust cycle of the late 1980s, David was involved in UPRC’s early efforts to develop and exploit horizontal drilling technology to economically produce new sources of unconventional oil and natural gas reserves. Curious about the business side of energy, David returned to UT to pursue his MBA, while continuing to learn and experiment with other new technologies to improve oil and gas economics.

Following his parents’ example, David has been involved in volunteer and civic activities throughout his adult life. In the early 1990s, David and his wife, Maire, began volunteering at The Center in Houston, one of Texas’s first and largest not-for profit organizations that helps adults with intellectual and developmental disABILITIES (IDD) to live and work independently. Choosing not to have children of their own, David and Maire’s extended family have become the residents at The Center, and fellow volunteers in other civic endeavors.

David and Maire’s other volunteer activities have included: supporting their alma mater, UT; hospitals and medical research organizations such as Baylor College of Medicine, Baylor St. Luke’s Hospital and Texas Children’s Hospital; parks and civic development such as Houston Parks Board; and education initiatives like Communities in Schools. However, the biggest opportunity and the greatest need they saw was to help the 500 adult residents and clients at The Center.

Their early involvement ranged from mentoring to helping in the workshop and from hosting the annual holiday party to selling products made by The Center’s clients. After David joined the board in 1996, he became increasingly involved in fundraising. In 2007, while serving as the president of The Center’s board, David was notified by the City of Houston that it would no longer honor its 99-year ground lease. Eviction would likely have meant the end of The Center and a crisis for its residents and their families. In desperation, David organized and led a grassroots effort to “Save the Center,” serving as its chief negotiator and spokesperson in meetings with the city. He and his colleagues successfully negotiated favorable terms whereby the city entirely financed the sale of the property to The Center. He also helped negotiate similar arrangements for several other neighboring non-profit civic organizations that serve Houston’s visually and hearing impaired communities.

By the fall of 2015, The Center was experiencing financial difficulties, partially as a result of its clients living substantially longer lives due to improved living conditions and partially due to the State of Texas’s decision to underfund and refuse federal funds to support programs for adults with IDD. These financial challenges were coupled with the significant debt service that had resulted from The Center’s land purchase. Feeling partially responsible for its financial challenges and lacking access to other funds, David came up with a solution…he would ride his bike across the U.S. and meet with leading IDD organizations along the way to learn their best practices, while raising $11 million to pay off The Center’s debt and provide capital for growth. David shared the idea with Maire, who quickly agreed to support his vision.

In an effort to transform The Center and raise awareness about all individuals with IDD, David, who was a recreational cyclist at the time, took a sabbatical from SCF Partners to start Pursuit for Those with disABILITIES, known as “Pursuit”, in early 2016.

Pursuit quickly established three goals: 1. Raise $11 million in six months; 2. Organize and meet with leading IDD service providers across the U.S.; and 3. Raise national awareness on behalf of the entire IDD population. With these ambitious goals and a tight timeframe, David and Maire held a series of Houston events to create a volunteer leadership team to develop and execute a plan. They were overwhelmed with the outflow of support, and quickly established a leadership team of eight committees, 18 co-chairs and more than 300 volunteers. The project began to expand and accelerate with new layers and features added to enhance the original vision and goals.

On June 6, 2016, David and Maire, along with a traveling support team, dipped their rear bicycle tires in the Pacific Ocean in Astoria, Oregon, and began their 60-day pilgrimage across the U.S. Along the way, they raised $13.5 million, coordinated learning visits and toured 31 leading organizations that provide support to people with IDD. They also met with local, state and federal officials, and told their story to over 30 news and media organizations. More significantly, 100 other riders joined David for parts of the actual cross-country ride.

Back at The Center in Houston, more than 1,000 volunteers rode virtually in a temporary cycle studio featuring video feeds from the road.  More than 2,000 new donors provided financial support to The Center. On August 3, 2016, the Pursuit team reached the Atlantic Ocean at Rehoboth Beach, Delaware. Elated and exhausted, the 100-plus volunteers gathered for a Texas barbecue in Washington, D.C., to celebrate the successful accomplishment of the Pursuit goals.

In November 2016, David and the Pursuit team hosted a learning and collaboration summit in Houston with 20 other IDD organizations and more than 400 guests. Collectively, they published a compilation of learnings from the Pursuit Campaign. In the fall of 2016, The Center repaid its debt with proceeds from Pursuit, took full possession of the land under its campus, and started planning The Center’s next chapter - a new, state-of-the-art campus.

In 2017, Hurricane Harvey flooded 70 percent of The Center’s campus, while dropping over 50 inches of rain on Houston. Fearing that The Center’s operations would be impacted for months, David quickly organized a fundraising campaign that raised $1.4 million. In addition, more than 1,000 volunteers came to help dry out and repair the facilities, allowing The Center to resume operations within weeks.

In 2018, The Center began plans to construct a new campus employing many of the lessons learned from the Pursuit campaign. While much work remains, The Center is now a beacon of light in realizing David and Maire’s dream of advancing the lives of people with disABILITIES in Houston and across the U.S. by redeveloping the newly named Center for Pursuit.

“My volunteer work started early and out of a sense of responsibility, almost a ‘rebate’ for years of good fortune and good health,” David said. “It later evolved into a desire and opportunity to help a large group of people who are underserved and underappreciated, but have an amazing desire for personal growth. Now it has evolved into a fun way to pursue challenging goals with friends and to help others. That is a true Pursuit.”
With much left to accomplish, David concluded, “Volunteering has led to many of the most challenging, fulfilling moments of my life in ways I never could have imagined. I hope to participate in many, many more Pursuits.”