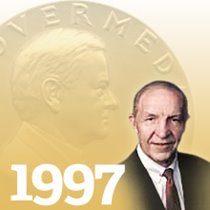 For a lifetime of service to humanity, engineer and educator, whose work has saved innumerable lives, brought relief from disease and hunger, and given hope to people in arid lands throughout the world.

Otto Jennings Helweg, currently Dean of the College of Engineering and Architecture at North Dakota State University, is a person of considerable and diverse talents. In addition to having a B.S., M.S., and Ph.D., in civil engineering, he has a Masters of Divinity with majors in theology, psychology, and philosophy, a M.S. with majors in marketing and finance, and a M.S. with a major in administration of higher education. While at the U.S. Naval Academy, where he earned his first engineering degree, he was undefeated heavyweight boxing champion, played on Navy's Cotton Bowl football team, and was honorable All-American in lacrosse. Herbert Hoover said the purpose of the medal is to mark the public service of engineers who have gone outside of their strictly professional work to interest themselves in civic and humanitarian causes. Most people get involved in civic and humanitarian causes after they have advanced in their profession. Otto Helweg's involvement in civic and humanitarian causes began at the beginning of his professional career and continues to the present.

While on active duty in the Navy, Helweg devoted considerable time counseling young recruits. After completing four years in the Navy, he and his new bride spent a year as volunteers teaching in a mission high school in Tehran, Iran. After completing his masters degree at U.C.L.A., Helweg eschewed a Sackett Fellowship for Ph.D. study and, instead, returned to Iran in order to help the poor of this country. He, his wife, and new son returned as fraternal workers, where he devoted five and one-half years working among the Kurds in Western Iran. While there, Helweg established the first water quality laboratory in Western Iran and took part in small and large scale village water projects. The greatest cause of infant mortality in developing countries is dysentery, which is caused by polluted water supplies. Most villagers get their water from hand-dug wells, or springs. These sources are often contaminated by human and animal wastes or other pollutants. In addition, he completed a number of other volunteer projects, involving structural design and irrigation improvement that aided the poor villagers. One project was featured by the National Plan Organization as the outstanding project of the year.

While in Iran, as field hydrogeologist for a major study of the Karkhe River Basin, Helweg discovered a number of Kurdish villages in the barren, remote mountains of Western Iran that were suffering from both polluted and inadequate water supplies. While the Ministry of Planning in Iran was willing to spend money on visible projects they had no interest in assisting the many less visible villagers.

Helweg was able to convince the regional director of the Ministry of Planning to contribute a nominal sum of money for materials and local labor with the condition that Helweg would supply some materials and his work would be voluntary. Perhaps the most satisfying part of the project was developing a spring from a conglomerate formation on the side of the mountain which was drying up and was the sole source of water for several villages. Helweg was able to increase the spring discharge five fold and construct a piping system to bring water to a place where the village women could gather pollution-free water, do washing, and water livestock. In fact, there was enough discharge to irrigate several small vegetable gardens.

Part of the project was disinfecting the spring and killing the leaches that inhabited it which caused choking of humans and animals when ingested. Helweg designed a protective space for the spring source and trained the villagers to maintain the protective environment of the spring. Interestingly enough, with pictures and a description of the project, the regional director used it as the show case when the national director came for his annual inspection. From this project, others were approved and the health of this area in Iran greatly improved.

Helweg assisted the Saudi government in developing a water studies center and directed their agricultural experiment station. In addition, he has assisted South American countries and Russia. On a local level, Helweg is active in his church, serving in leadership positions and teaching Sunday School, has been advisor and founder for a number of student and faculty organizations, and took part in many activities to promote engineering, especially among the poor inner city African Americans in the Memphis area.

Helweg is a Fellow of the American Society of Civil Engineers and is a member of sixteen other professional organizations. He has received a number of honors, including the Ground Water Scientists of the Year, the outstanding Civil Engineer in the State of Tennessee and the most outstanding engineer in the Mid South. Helweg has written over 100 refereed papers and three books.

One of Helweg's nominators said "Even today, although he ascended to the demanding position of Dean at North Dakota State University, Otto still takes time to search out students to motivate them for service projects and activities to benefit society at large. He does this not because of any personal return but because of his deeply held belief in service". Another nominator said "...Otto Helweg personifies the ideal for which every person should strive: to share willingly in his time, his expertise and his resources to improve the intellectual, financial, emotional, and spiritual conditions of others." Another nominator summed up Helweg by saying "In my mind he is a man after God's own heart."

In recognition of a lifetime of humanitarian efforts, Otto Helweg now joins the illustrious list of Hoover Medalists.