The 2019 Nominating Committee has selected the following members for Society Office with terms starting in June 2020. Selected nominees will be voted on in the fall via an online ballot. Please watch for an email with the announcement for the online ballot. 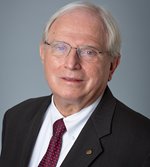 In 1970, Erler joined Sargent & Lundy, a provider of comprehensive services for complex power generation and power transmission projects, where he was responsible for executive leadership, implementation, and technical integrity of the company’s clients and projects in the United States and internationally. These projects included the design and analysis of all containment vessels and the seismic study of the company’s nuclear and fossil fuel power plants. Before retiring from Sargent & Lundy in 2003, Erler served as owner and senior vice president of the company for 18 years.

At ASME, Erler has held a number of leadership positions including as a member of the Society’s Board of Governors; as a member of various ASME codes and standards committees, including vice president of ASME’s Nuclear Codes & Standards, and past chair of the Board of Nuclear Codes and Standards; and chair of ASME’s Boiler & Pressure Vessel Section III Division 2. He also served as the Society’s secretary/treasurer where he was responsible for the oversight and review of all financial matters, including budgets, pensions, expenditures, and investments, which included interactions with the financial committees of the ASME Board of Governors and the Society’s Executive Management team.

Erler currently serves as treasurer of the Board of Trustees for LeaderShape, a nonprofit organization that helps college students and early career professionals develop leadership skills by providing training to promising young adults to help them learn to lead with integrity and achieve success.

Erler has been a registered professional engineer in fourteen states and currently maintains a P.E. license in Arizona. He earned both his B.S. and M.S. degrees in civil engineering from Purdue University, and he is also a graduate from the Business Executive Program at the University of Michigan. Erler is a recipient of the ASME Dedicated Service Award and the ASME Bernard F. Langer Nuclear Codes & Standards Award.

Board of Governors — Elects

Andrew S. Bicos, Ph.D.
Andrew S. Bicos, Ph.D. (Member, ASME) is an independent consultant, having recently retired from The Boeing Company after more than 31 years. At Boeing he was in executive management in the R&D organization where he served as director of systems engineering, and previously as chief engineer of the aeromechanics research group and director of flight sciences technology strategy.

Prior to this, he was director of structures and manufacturing technology strategy. Dr. Bicos has been an ASME member since college and actively involved with the society for more than 25 years, starting out on the Adaptive Structures and Material Systems Technical Committee. He also served on boards of award and conference organizing committees. He served as Aerospace Division chair from 2003 to 2004. Dr. Bicos joined the Industry Advisory Board (IAB) in 2002 as the Boeing representative and served as chair of the IAB from 2014 until 2016. In 2004, he became co-chair of the Aerospace/NASA R&T Task Force of the Inter-Sector Committee on Federal R&D, serving in that role until 2017. In 2016, Dr. Bicos was selected as an ASME Federal Fellow serving in the office of Congressman Tom Reed (NY-23) where his responsibilities included manufacturing and energy policy. In 2018, he chaired the Presidential Task Force on Membership. Dr. Bicos currently serves on the Government Relations Committee and is a member of the Manufacturing Public Policy Task Force.

He is a member of the California State University at Los Angeles President’s Council. He has served on the Board of Directors of the National Center for Manufacturing Science and on the National Research Council Committee on Space-Based Additive Manufacturing.

Dr. Bicos has a B.S. in Mechanical Engineering and an M.B.A. from UCLA and an M.S. and Ph.D. in Aeronautics & Astronautics from Stanford University.

Richard C. Marboe, Ph.D.
Richard C. Marboe, Ph.D. (Member, ASME) is currently the Director of Engineering Services at the Applied Research Laboratory (ARL), The Pennsylvania State University. He is responsible for physical plant, mechanical and electrical design and fabrication, public release, export compliance, and safety. This includes operation of 15 buildings in the State College area and 10 remote facilities providing 730,000 sf of office and laboratory space for ARL. He is leading a major building recapitalization initiative for ARL after 70 years as a lab. He has previously had oversight of security and served as CIO.

He joined the research faculty at ARL Penn State (a DoD University Affiliated Research Center) in 1986 after five years as a submarine and engineering duty officer in the US Navy. His Navy research has included leading propulsor design programs for submarine, surface ship, and weapon propulsors, two-phase flow acoustics (cavitation, bubble excitation, acoustic propagation screening), turbomachinery noise and vibration, and hull flow-induced noise. He has also spent time as a project manager at the Naval Sea Systems Command.

Dr. Marboe has been a member of ASME since 1982 holding leadership positions for the past 24 years. He has served ASME as past chair of the Noise Control and Acoustics technical division, past leader of the Environment and Transportation technical group, ASME VP, Programs and Activities and just completed a term as Senior Vice President, Technical Events and Content Sector. He has chaired several presidential task forces, co-chaired the Sector Management Committee, and participated as a Nominating Committee member on multiple occasions.

He received his SB in Mechanical Engineering and SM in Ocean Engineering from the Massachusetts Institute of Technology and a Ph.D. in Acoustics from The Pennsylvania State University.

Mr. Stevenson has a 33+ year career working in industry. He became a principal of McCormick Stevenson in 2003, and the company continues to grow by providing engineering services to clients such as Northrup Grumman, BAE, General Dynamics, and the National Nuclear Security Administration. Paul is active in several professional societies but focuses much of his volunteer effort within the American Society of Mechanical Engineers and has been a member since 2001. He formerly served on the Exam Review Committee for ASME’s Engineering Management Certification program and supports his local section of ASME, the Florida West Coast section, as the Student Liaison to the USF Student Chapter. He has twice served on the Nominating Committee and has most recently served as the Senior Vice President of the Student and Early Career Development Sector. During his 3-year tenure, the Sector designed and implemented the extremely successful “E-Fest” program. He received a Distinguished Service Award from ASME in 2019 and was the Florida West Coast Section’s “Engineer of the Year” in 2009.

Mr. Stevenson supports engineering education by presenting to students at the University of South Florida College of Engineering on the value of networking each semester, and formerly served as Chair of the Board of Directors for the Todd Center at Northeast High School in St. Petersburg, a special program targeting high school students interested in Engineering, Pharmacy, or Physical Science careers.

Starting out as a draftsman in the early 80’s, Paul worked his way through college and earned his Bachelor of Science in Mechanical Engineering degree from the University of South Florida in 1995.