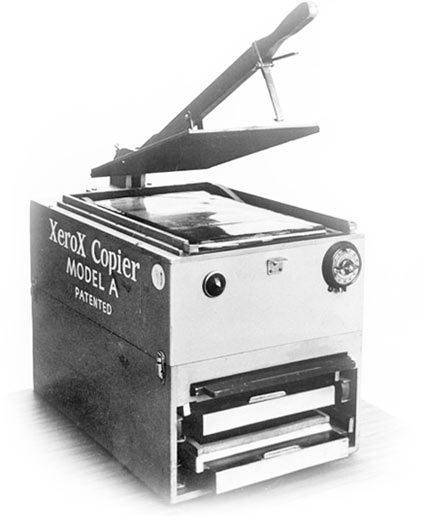 The convenient dry-copying process for printed pages is among the truly revolutionary inventions of the century. In 1937 Chester Carlson, a New York patent attorney, developed the concept of applying an electrostatic charge on a plate coated with a photoconductive material. On November 22, 1938, Carlson dusted powder dyed with evergreen spores across an exposed plate and transferred the imprint to the surface of a paper. While the physics of the device is mainly Carlson's, researchers at both Battelle Memorial Institute and the Haloid Company (now the Xerox Corporation) solved many unique mechanical engineering problems.

After World War II, Haloid became a corporate sponsor of the research in exchange for the license to develop machines that would print up to 20 copies. On October 22, 1948, Haloid gave a public demonstration in Detroit and in 1949 introduced the Model A. By 1955 Haloid introduced the first completely automated xerographic machine. By using a rotating drum instead of a plate, it produced enlarged prints on a continuous roll from microfilm originals. In 1959, Haloid Xerox risked all assets to market the first fast, low-cost, and convenient office copier, the 914.

Plaque is mounted at lobby exhibit.