One of the world's largest fabrication tools, dominant in aircraft and aerospace development 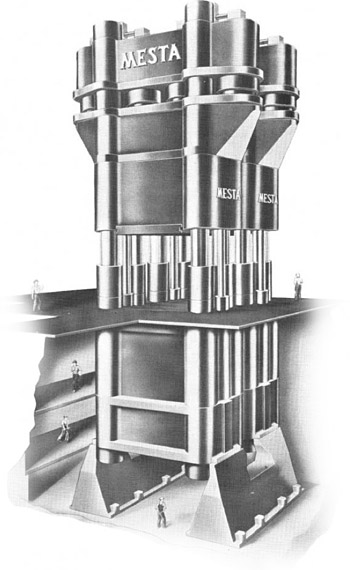 This 50,000-ton die-forging press is among the largest fabrication tools in the world. It was designed and built for the U.S. Air Force by the Mesta Machine Company of Pittsburgh, following the discovery a 30,000-ton press used by the Germans in World War II (later acquired by the Soviet Union). By 1950, a Heavy Press Program was organized to establish a self-sustaining industrial base for a press capable of producing large forgings and extrusions for the United States. The 50,000-ton Mesta press was one of the first built under this program between 1952 and 1955. It has been dominant in commercial aircraft development as well as advanced military aircraft and aerospace programs. (See also NL 66.) The Aluminum Company of America is the operating contractor.

The principle of force multiplication that underlies the action of hydraulic presses was demonstrated in 1646 by Blaise Pascal of France. It was first incorporated into a useful industrial press by Joseph Bramah of England in 1796.