First US naval shipyard, achieving notable firsts in technology and producing many well-known US naval vessels

Shipbuilding in Portsmouth-Kittery began in 1690. The day after Paul Revere'/s ride to Portsmouth in mid-December 1774, colonists took the port from the British and soon began a fully integrated operation for U.S. warships, which became the Portsmouth-Kittery Naval Shipbuilding Activity. By the end of 1775, Congress authorized thirteen frigates to be ready in three months'/ time: the frigate Raleigh was launched first. By 1874 the yards had accounted for the construction of over fifty-four ships.

Some thirty buildings dating before 1900, such as the Mast and Boat Shop and Riggers and Sail Loft of 1837, show the marks of those pioneer days. The modern shipyard now builds and repairs submarines. Among numerous technical firsts and production of notable ships, it was the first government yard to build a submarine (1914 to 1917) and a nuclear submarine (Swordfish, 1958). 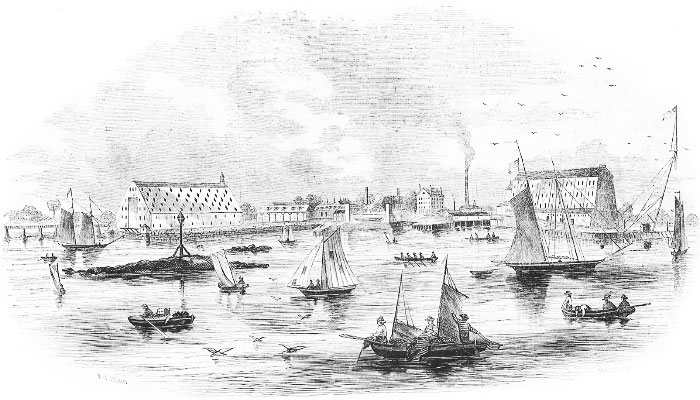 View of the United States Navy Yard, at Portsmouth, NH