First rocket engine to use high-energy liquid hydrogen as fuel 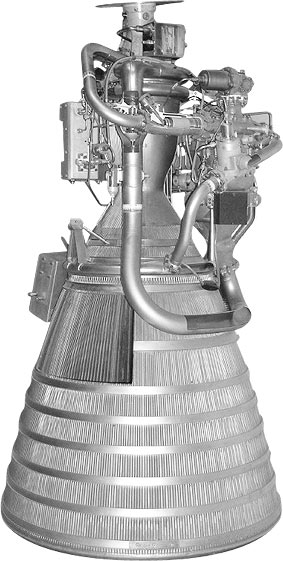 The RL-10, which served as the power plant for NASA's upper-stage Centaur space launch vehicle, was the first rocket engine to use high-energy liquid hydrogen as a fuel. It has provided precisely controlled, reliable power for lunar and planetary explorations. The RL-10 embodied numerous advanced design features, including multiple use of its fuel with the "bootstrap cycle." The RL-10 is also capable of multiple restarts in space, which enables positioning of satellites or further escape of Earth's gravity.

Design of the RL-10 began in the fall of 1958 at the Pratt & Whitney Aircraft Florida Research and Development Center. In the first flight demonstration on November 27, 1963, a pair of RL-10s successfully boosted a Centaur space vehicle into orbit around the earth. Two months later, on January 29, 1964, a six-engine cluster of RL-10s generated 90,000 pounds of thrust to lift the first test flight of the Saturn S-IV stage, pioneering hydrogen technology on the Saturn I booster. A mock up of the RL-10 is now at the aerospace museum at the Smithsonian Institution.