Most advanced low-lift drainage pump in use in the early 20th century, later used worldwide

With a water table several feet below ground level, New Orleans faced a crisis after every heavy rainfall, not just through flooding but also through disease (yellow fever and malaria) caused by impure water. New Orleans was dependent on mechanical means for lifting water from its canals and sewage systems.

A. Baldwin Wood (1879-1956), a young assistant city engineer, designed and installed a system of large screw pumps (axial flow machines) to syphon water and accelerate drainage. By 1915 the Wood screw pump became the most advanced drainage pump in use. After their successful operation in New Orleans, Wood's pumps were built in the Netherlands, Egypt, China, and India. Wood also redesigned Chicago's drainage system. 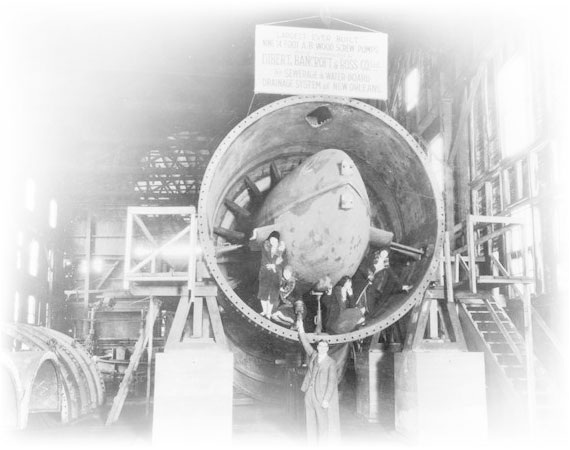 Contact the Water Board for and appointment and security clearances, through the Community and Intergovernmental Relations office: (504) 585-2169

Landmark is intact. Joseph Sullivan was also still there. (2002).