The plant began operation only twenty-six days after Thomas Edison's first steam plant began operating on Pearl Street in New York (NL 46). On September 30, 1882, an Edison "K" type dynamo produced electricity from a water-powered turbine to light three buildings (two paper mills and the H.J. Rogers home), at rate of about 12 1/2 kilowatts. It is the first Edison hydroelectric central station to serve a system of private and commercial customers in North America. The story of its development provides keen insight into the nation's first experiences with the electric light.

Visiting info: The present site is an exact replica of the original plant. It is overseen by the Appleton Historic Preservation Commission and the City's Park and Recreation Department. The Park and Rec Department has keys for call-ahead appointments (only) to view the interior. Requests for access can be made at: (920) 832-5910. The exterior is available and accessible at all times. It is possible to get close and look through the windows.

Additional info: Presently there is an effort underway by the Historic Preservation Commission and several other local entities to move the station to the "Vulcan Heritage Park" on the Fox River and be sited closer to where hydroelectric power was originally generated for the early paper mills. At this location it will be more visible and more accessible to the public and reside in the shadow of "Hearthstone" - the first residence in the world illuminated by Edison's electric lamps lit by hydro-generated electricity, as it was the residence of H.J. Rogers, one of the principals involved in building the Vulcan Hydro plant. Hearthstone survives today as a historic house museum and retains the original light fixtures, switches and much of the original wiring from the 1880's. It is a worthwhile visit in its own right. Locating the Vulcan Hydro station replica close by and in view of the home, should be beneficial for both.

Approval for the new location from the City of Appleton has been secured and fundraising efforts are on their way. The group is aiming for spring 2008 construction depending on the success of their fundraising efforts. We Energies—formerly the Wisconsin Michigan Power Company, the former owner—hopes to be a principal contributor through the Wisconsin Energy Corporation Foundation in support of this preservation effort. 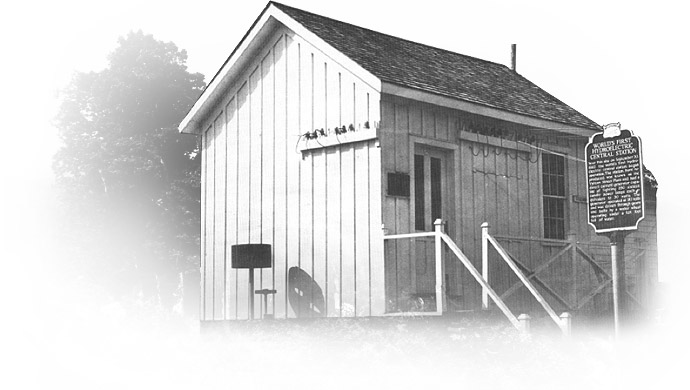 September 1977.
ASME was joined in this landmark'sdedication by our colleagues from IEEE History Center and ASCE History & Heritage.