#270 The Thurston Collecion of Laboratory Artifacts at Cornell University

The Thurston Collection of Laboratory Artifacts at Cornell University

Julia Thom-Levy, Vice Provost, Academic Innovation, examines Thurston’s Autographic Testing Machine at Sibley School
Housed at the Sibley School of Mechanical and Aerospace Engineering, Robert Thurston’s collection of laboratory and pedagogical devices were essential to his vision of the central role that the engineering laboratory would play in the training of mechanical engineers. 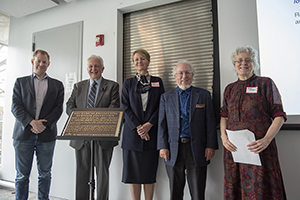 (L-R) David Erickson, Assoc. Dean of Engineering for Research, ASME President Richard Laudenat, Julia Thom-Levy, Vice Provost, of Academic Innovation, Francis Moon, H&H Member, and Elizabeth Fisher, Associate Professor and Associate Director of the Undergraduate Program, with commemorative plaque.
This collection, used at Cornell between 1885 and 1905 includes a variety of testing machines, including meters, indicators, scales and dynamometers. Among them: the first device to automatically measure both stress and strain without electronics (eventually used in Thurston’s pioneering work on work-hardening metals); an instrument he invented to measure lubricating properties of machine oils; and an autographic torsion testing machine which was said to “provide the prototype for the present day standardized automated materials testing devices,” wrote James F. Bell of John Hopkins University. 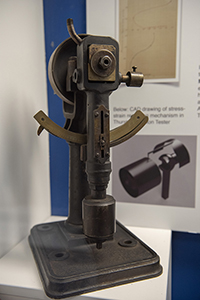 Robert Thurston’s Autographic Torsion Testing Machine at Cornell
One of best-known engineers of the 19th century, and ASME’s first president, Thurston’s career mainly centered on the development of steam power. Building upon his work at the Stevens Institute of Technology, Thurston went on to implement his vision at Cornell, which became the largest and most influential mechanical engineering program in the U.S.