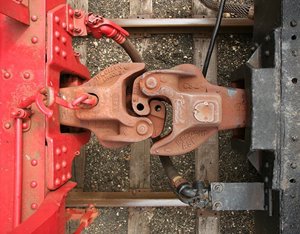 Image of a Janney Coupler on a locomotive (Coupler)
Patented by Eli Janney in the years following the Civil War, the Janney interlocking coupling system succeeded the link and pin coupler which required railroad workers to stand between cars in order to join them together – a major cause of injuries and death.

Janney’s design, which resembled a curved human hand, held train cars together reliably and firmly, which eliminated slack and made transport safer overall.

The U.S. Safety Appliance Act of 1893 mandated that all rail lines conducting Interstate commerce require card that couple and uncoupled without the manual assistance of a worker. That regulatory boost, tied to the advantages of Janney’s model, made it the industry standard by 1916.

As a result, the Janney Coupler allowed rail card to interchange across varying lines, speeding the movement of good and people to faraway destinations. Today, these can be found on 1.4 million freight cars, and countless numbers of locomotives, passenger cars and light rail systems.

This landmark was approved as part of ASME's Virtual Landmark program