Collection of restored windmill operated waterpumps made at one of the three windmill manufacturing companies in Batavia. In late 19th century - early 20th century, Batavia became known as 'The Windmill City' for being the largest windmillmanufacturerin U.S. 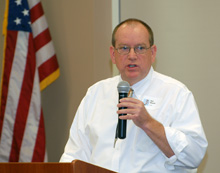 Bill Shust, event emcee, landmark nominator.
This collection of early mass-produced, self-governing windmills were designed for ease of assembly, operation, and maintenance by six manufacturing companies in the town of Batavia, Illinois from 1863 to 1951. 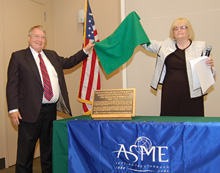 ASME Past President Vickie Rockwell, unveils commemorative plaque with Batavia Mayor Jeff Schielke.
Invented by Connecticut machinist David Halladay, the mechanical design of the wind engine system of gears and linkages made efficient use of centrifugal and gravitational forces in controlling the windmill blade's resistance to airflow. Through Halladay's patent, the windmill's blade orientation was automatically adjusted to the wind to provide constant wheel speed.

Restoration of this collection first began in 1994. According to local windmill supporters Bob & Francine Popeck, most of the 17 mills in the town of Batavia have all of their original cast iron and other metal parts. Damage metallic parts have been replaced. The original materials which degraded in the wood windmills have also been replaced. 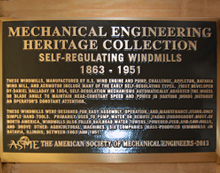 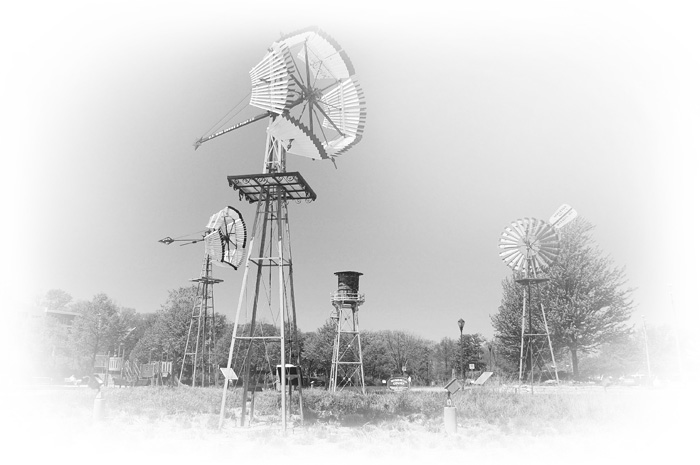 Windmills on display at park in Batavia, Ill.

Open to the Public. For more info visit Museum website at www.bataviahistoricalsociety.org or call (480) 994-2297

Sept, 2013.
Plaque presented by ASME Past President Victoria A. Rockwell