The largest crane of the hammer-head or Titan' type, and the earliest survivor of its type 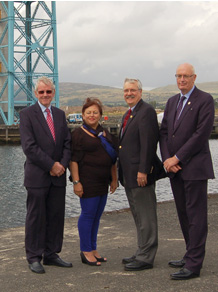 Designed by Adam Hunter and Sir William Arrol & Co Ltd, and built in in Clydebank, Scotland just after the turn of the century, the Titan Crane was designed to lift boilers and engines at the John Brown & Company shipyard. At 164 feet tall (50m), its innovative design included a fixed counterweight and electrically operated hoists, mounted on a rotating beam. This allowed the crane to be faster and more responsive than its steam-powered predecessors.

The crane is the earliest survivor of its type, having been described as "the largest crane of the hammer-head or Titan' type, by Engineering Magazine in 1907. It contributed significantly to shipbuilding and world transport, and had produced comparable or similar projects in numerous countries. 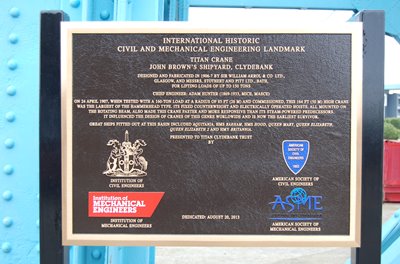