This compressor was a product of the combined technology and design heritage of both the C. & G. Cooper Company of Mount Vernon and the Bessemer Gas Engine Company of Pennsylvania, which had merged in 1929. Ralph L. Boyer, the chief architect of the GMV, worked for Cooper-Bessemer from 1926 through 1965.

The GMV compressor's efficiency and compactness had a significant impact worldwide, and the compressor enjoyed a remarkable production run of 55 years. Its ingenuity lay in its compact, V-angle engine design with an articulated connecting rod arrangement, allowing two power piston connecting rods to drive onto one master compressor rod for each throw of the crankshaft. This design had lower bearing loads than a side-by-side rod arrangement, thereby increasing efficiency and production.

The United States, Canada, the United Kingdom, France, Germany, Italy, Mexico, Japan, and the Soviet Union all produced GMV compressors, with more than 4,500 total being produced. The GMV compressor was valued for its superior safety, reliability, and cost of operation when compared to other compressors. Some of the machines produced in the 1940s are still operating full-time.

This GMV-4 engine is SN-42290, was manufactured in 1944 as a shop air compressor and installed in the Mount Vernon Power House, and was used until 2002. It is still capable of operation, but not set up to run. 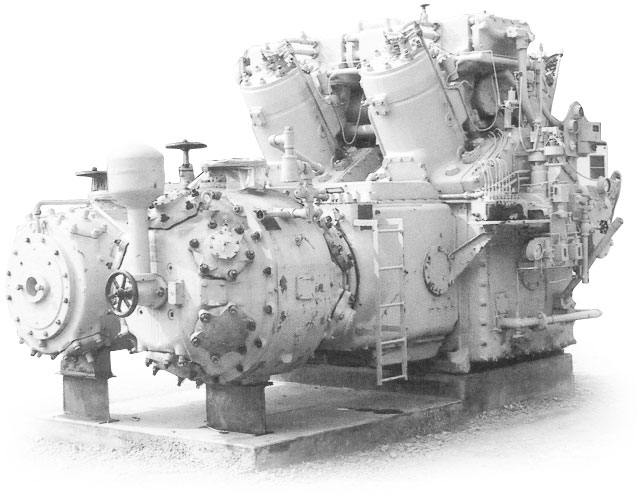