A number of major engineering feats required to complete the tasks for the mission at hand, which were later used in further projects

The Hughes Glomar Explorer was designed to complete the mission of lifting a 2,000-ton Soviet submarine 17,000 feet from the bottom of the Pacific Ocean. The Soviet Golf-II class submarine K-129 sank in the Pacific Ocean near Hawaii in April 1968 and the recovery mission, “Project Azorian”, as it was termed, took place in July 1974. In the short years of its design and construction the modern limits of “state of the art” were extended from the impossible to the possible.

Some of the major innovations and advances in mechanical engineering included: a large center well opening in the hull and a means of sealing it off so that the object could be examined in dry conditions, a hydraulic lift system capable of hoisting a large, heavy load, a tapered heavy lift pipe string, including tool joints, designed, constructed and proof tested to exceptionally demanding standards, a “claw” with mechanically articulated fingers which used surface supplied sea water as a hydraulic fluid, a motion compensated and gimbaled work platform system that effectively isolated the suspended load from the roll, pitch and heave motions of the ship, and a “docking leg” system which supported the weight and controlled the motion of the “claw” and load during the transition from dynamic open water conditions to the shelter of the ship’s center well. 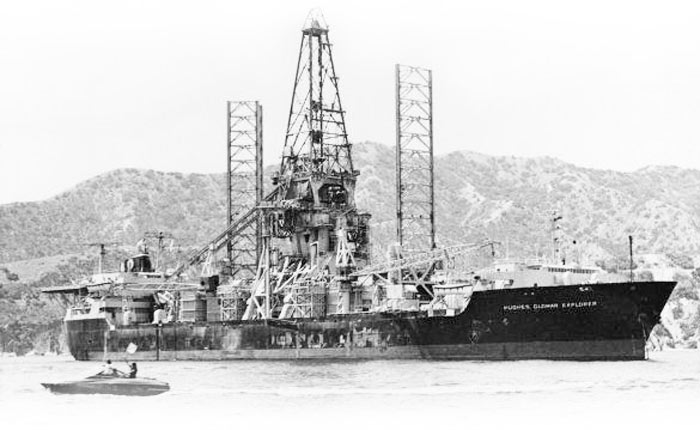 No longer exists in original form

Ceremony took place on July 20, 2006, at the GlobalSantaFe Corporation'/s Houston headquarters, the present owner of the vessel. ASME Past President Keith Thayer presented the designation to Chairman Bob Rose and project leader Curtis Crooke, retired President of Global Marine Development Company. With members of the original engineering team and ship'/s crew among the attendees, Thayer commented on the important contributions that the ship has made to the development of mechanical engineering and innovations in offshore drilling technology.