15 millionth Model T to come off the assembly line, marking the end of its production

When Ford Motor Company introduced its new Model T on October 1, 1908, even an inveterate optimist like Henry Ford (1863-1947) could not predict the vast changes that his rather homely new vehicle would produce. What flowed from this series of bold innovations was more than an endless stream of Model Ts — it was the very foundation of the twentieth century itself. The assembly line became the century's characteristic production mode, eventually applied to everything from phonographs to hamburgers. High-wage, low-skilled factory jobs accelerated both immigration from overseas and the movement of Americans from the farms to the cities and into an ever-expanding middle class. The creation of huge numbers of low-skilled workers also gave rise in the 1930s to industrial unionism as a potent social and political force. Higher wages allowed workers to buy the very goods they produced, including cars. The Model T spawned mass "automobility," altering our living patterns, our leisure activities, our landscape, and even our atmosphere. Finally, mass automobility meant that everywhere there was crude oil in the ground, from the Permian Basin to the Persian Gulf, there was a potential for wealth and conflict. The Model T had some advanced features, like a four-cylinder engine with a detachable cylinder head and a one-piece cylinder block. It did use lightweight, high-strength vanadium alloy steel. But one key to its early success was a simple thing like ample ground clearance, allowing it to deal with abysmal rural roads. At $850 the new car was cheap for its day, but still cost $30 more than the average worker's annual wage. The real key to the Model T's importance lies in Henry Ford's oft-quoted desire to "… build a car for the great multitude ... so low in price that no man making a good salary will be unable to own one." Ford fervently believed that if automobiles could be priced low enough, people would clamor for them.

By the end of 1913, Ford and his engineers built a huge new factory, created the moving assembly line, and driven the price of a Model T down to $550. But the pace and nature of work on the assembly line led to labor turnover so high that, on January 5, 1914, Ford Motor Company announced that it was nearly doubling its prevailing wage rate to $5 a day, an unheard of amount of money for unskilled or semiskilled work. By the time the last Model T was produced on May 26, 1927, it was obsolescent technology, being fast superseded by more powerful, more comfortable competitors. But nothing has equaled its impact.

The 1927 Ford Model T, on display at The Henry Ford, is the 15 millionth Ford Model T to be produced. This touring car has a 4-cylinder, in-line, water-cooled, 176.7 cu. in., 20 hp engine, and its price at the time was $380. It came off the line at Ford's Highland Park, Michigan, plant on May 26, 1927, and marked the end of Model T production. Eight of Ford's longest serving employees — John Wandersee, August Degener, Frank Kulick, Fred Rockleman, Charles Hartner, Charles Maida, Peter Martin, and Charles Sorensen — each stamped a serial number numeral on the engine. Henry Ford's son Edsel drove the car off the line, accompanied by his father, Martin, and Sorensen. The car has always remained in the possession of Ford Motor Company or The Henry Ford. 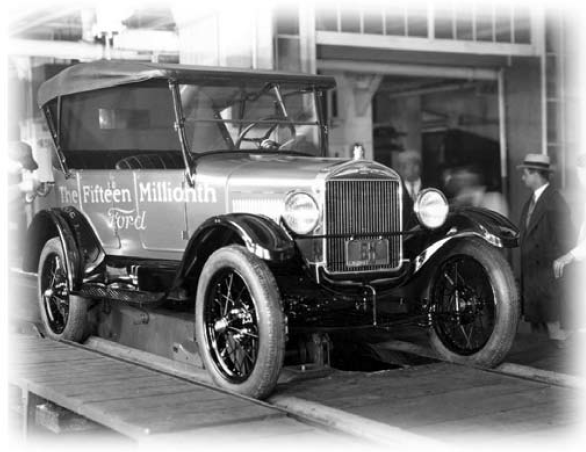 The Model T was designated as an ASME Historic Mechanical Engineering Landmark on May 20, 2005. ASME past president William Weiblen presented the bronze plaque, which was accepted on behalf of The Henry Ford by Edsel B. Ford II, the great-grandson of Henry Ford and retired vice president of the Ford Motor Company.