The growth of the shrimp processing industry and its impact on local economies along the northern Gulf of Mexico, The U.S. West Coast and in more than forty other countries is largely attributable to the “machine that peels shrimp,”invented by sixteen year old James Martial Lapeyre from Houma, Louisiana,.

The current Laitram Machinery Model A Automatic Shrimp Peeler is virtually identical to the first unit that was put into commercial use in 1949. Each machine peels approximately 1,000 pounds of shrimp an hour, ranging in size from 10 to 200 count per pound. Hand-peeling the same amount of shrimp would require the labor of as many as 150 experienced peelers, depending on the size and condition of the shrimp. Processors using the shrimp peeler realize a significant increase in yield per barrel of shrimp, a factor that can make or break a shrimp processing operation. Yield is increased because the peeling machine recovers 5% to 10% more meat from the head and tail sections of the shrimp than can be recovered in a hand peeling operation.

Because the peeling machine lowered processing costs, shrimp could be sold at a lower price to a much broader market than ever before. J.M. Lapeyre’s perseverance resulted in a machine whose influence extended into the world marketplace, beyond its revolutionary effect on local economies where it changed the seafood processing industry forever. 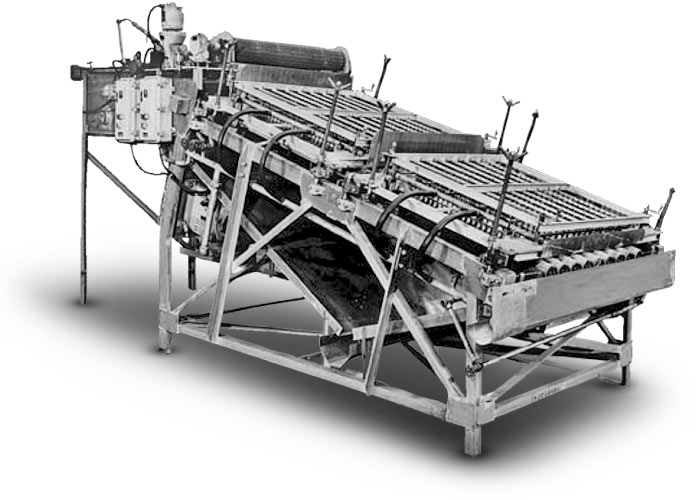 The Maritime & Seafood Industry Museum, where the landmark was housed, was damaged in Hurricane Katrina. As of summer 2007, the latest word was that the Laitram Company is planning to restore the machine and the museum is petitioning the local authorities to rebuild in a new location.

The Landmark Designation Ceremony took place on September 21, 2004. Among the attendees were representatives of Laitram Machinery, J. M. Lapeyre'/s family members and ASME New Orleans Section members who nominated and sponsored the landmark.