Philo Unit 6 was the world's first supercritical-pressure steam-electric generating unit to operate commercially. The mechanical engineering innovations represented by Philo 6 significantly advanced the thermal efficiency of power generation, thereby greatly reducing its production cost. Its performance proved that introduction of higher steam pressure and higher steam temperature to power generation-combined with use of a double-reheat cycle-indeed could produce new levels of thermal efficiency, approaching 40 percent. At that time, the national average thermal efficiency of all fossil-fueled power plants was 29.9 percent. Experience gained from the engineering, design, construction, and operation of Philo 6 provided a firm engineering basis for many larger, efficient generating units that were to follow.

Both the feedwater inlet pressure of 5,500 pounds per square inch (psi) [37.9 mega Pascal (MPa)] and the turbine throttle pressure of 4,500 psi (31 MPa) constituted new "highs" in their respective classes and were almost double the steam pressure previously utilized for power production. The main steam temperature of 1,150 F (621 C) was 50 F (27.8 C) higher than economically achievable with then-existing technologies. The use of a double-reheat cycle [1,050 F (566 C) first reheat and 1,00 F (5338 C) second reheat] was a major innovation in the engineering of steam-electric power plants. The cyclone furnace design, integrated unit controls, feedwater chemical control, steam generator startup system, and feed-pump design were all uniquely developed for this pioneering unit.

The next supercritical-pressure unit to enter commercial service in the United States, after Philo 6, was Philadelphia Electric Company's Eddystone Unit 1 in February 1960.

Aug. 1, 1957 - Philo 6, the first supercritical-pressure steam-electric generating unit, was declared to be in commercial operation

Jan. 1. 1979 - Philo 6 was retired from commercial operation; the unit along with the entire Philo Power Plant, was subsequently dismantled in 1984 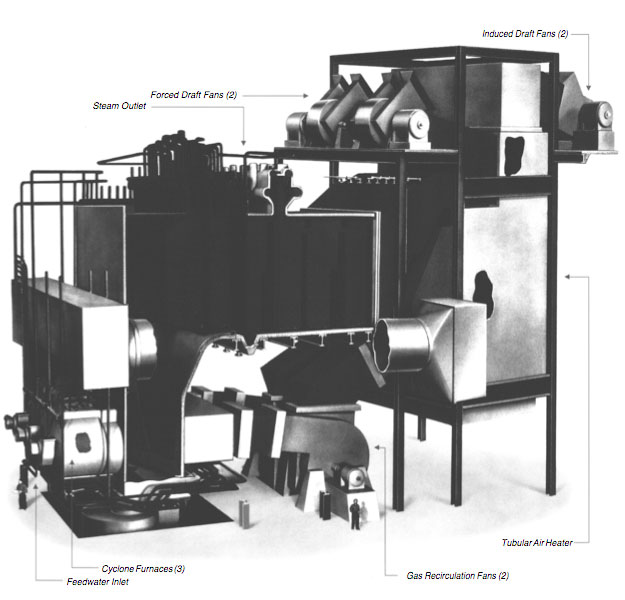 Philo 6 steam generator, manufactured by Babcock & Wilcox. This unit carried the manufacturer's designation UP (Universal Pressure) 1, the first one made.

Owner or plaque location, if different than above

The plant was near Zanesville, Ohio, and was retired in 1979 and demolished in 1984; the plaque is in front of AEP headquarters in Columbus.

Plaque presented on Aug. 7 by Past President Donald Zwiep; was attended by 150; sponsored by Central Ohio Section; covered by the Zanesville Times, Power Generation and World Generation magazines.