Founded by Eleuthère Irénéé du Pont (1771-1834), the Brandywine River Mills became the largest maker of explosive black powder in the United States. That success resulted directly from the firm's pioneering use of gunpowder processing machinery driven by water wheels and water turbines. Divided into separate buildings to promote safety, its rolling, graining, and glazing mills produced black powder in a range of grades for military, sporting, hunting, construction, mining, and other applications.

From age 16 to 20, Eleuthère Irénéé du Pont had assisted Antoine Lavoisier, chief of the French gunpowder works at Essone (and founder of modern chemistry). After the du Pont family immigrated to the United States from France in 1800. Du Pont immediately put his expertise to work, upon seeing the power quality of American gunpowder used for hunting guns and pistols. 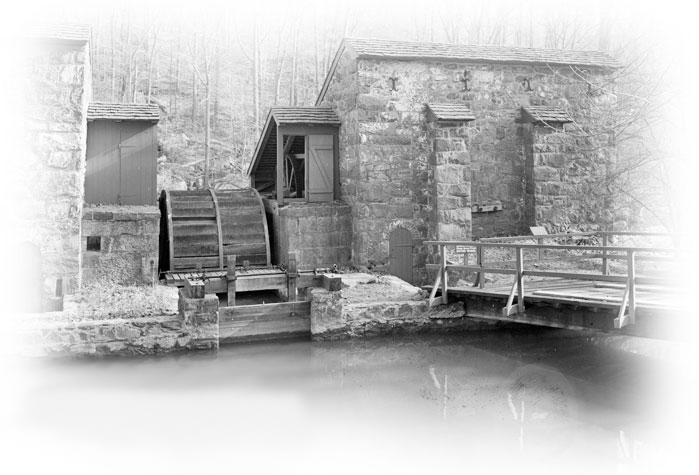 Improvements and expansions were made by successive generations of du Ponts including Alfred Victor (1798-1856) and Henry (1838-1926). Lammot du Pont (1831-1884), however, was trained as an engineer and made several significant developments both to the mechanical process and to the chemistry in mid-19th century. Lammot du Pont improved black powder, which forced other mechanical changes in the process and lead the company into the new field of high explosives. In 1857 Lammot patented "B" blasting powder—also known as soda powder—which used inexpensive Peruvian and Chilean sodium nitrate and made DuPont a major force in the blasting powder industry. The B blasting powder greatly improved the expansion economics (not appropriate for military or sporting uses). Lammot built new plants for the production of smokeless gunpowder and dynamite.

Started as a large-scale, sophisticated manufactory, Brandywine maintained operations for 119 years. The Brandywine River Powder Mills performed shell loading and some smokeless nitrations during World War I. They were the most sophisticated producers of black power until their close in 1921. This is an obsolete technology today. Aside from one operating powder mill, the Hagley Museum owns the only virtually complete set of process equipment in North America.

The Eleutherian Mills–Hagley Foundation was formed in the 1950s, with the Hagley Museum and Library formed in 1957.