The Pilatusbahn—the steepest rack railway in the world—has operated successfully since its opening in 1889 over a route of 4.62 kilometers (2.87 miles) between Alpnachstad on Lake Lucerne and Pilatus Kulm, rising 6,791 feet (2,070 meters) above sea level. This results in a gradient of 48%, or a rise of nearly one meter in two meters of run on the steepest sections of the line, which amounts to about a quarter of its length.

To keep the propulsion cogwheels from literally climbing out of their mating racks on the steepest portions of the Pilatusbahn, Zürich engineer Eduard Locher (1840 - 1910) devised a unique system that turned the rack on its side. The rack actually was doubled, engaged by opposing twin horizontal cogwheels. The combination not only ensured positive meshing of the racks and wheels even under extremes of loading, but guided the cars along the rails in place of conventional flanged running wheels and literally locked the cars to the mountainside. Before building the railway, the Swiss Federation was unwilling to approve a line built on the conventional pattern of ladder rack engaged by a vertical cogwheel, as had been used on a number of mountain railways in both the United States and Switzerland, out of concern that the cogwheel would "climb out" of the rack in high winds, with disastrous results.

Key to Locher's design are the flanges on the lower side of the horizontal cogwheels. The cogwheels then roll along both sides of the rack support beam and under the rack itself. This serves two purposes: it guides the car, and it prevents any combination of wind and gravity from lifting the car and disengaging the cogwheels from the rack. Locher's concept uses a narrow gauge (31.5 inch or 0.8 m) that allows sharp curves and lightweight rolling stock. All the car components, including engine, boiler, and passenger compartment, as well as water tank and coal bins, were mounted on one four-wheel chassis. The original 32-passenger steam cars averaged 2 to 3 miles per hour (3 to 4 kilometers per hour) and took over an hour to reach the summit.

Today's 40-passenger electric cars run at 6 mph (9 km/h) and make the trip in about half an hour. The builder of the original self-propelled steam cars was the Schweizerische Locomotiv & Maschinenfabrik (SLM) of Winterthur. (In 1998, SLM became Sulzer Winpro, and in July 2000, Sulzer sold its steam locomotive manufacturing interests to Hug Engineering, which has formed a new company called Dampflokomotiv- und Maschinenfabrik AG, or DLM.) The original steam-powered cars were replaced by electric cars in 1937. Additional updates were made in 1954 and 1967, all by SLM.

The driving-gear principle and basic design remains the same for the electric version as it was for the steam. After 100 years of operation, the flanges on the cogwheels had significantly worn down the lower sides of the teeth on the rack rail. Simply turning the rack rails over provided a brand new wearing surface that should be good for another century of service. 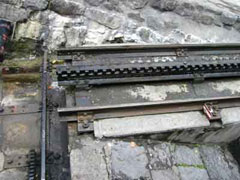 Two original steam cars still exist. One is on loan to the Verkehrshaus der Schweiz (Swiss Museum of Transport and Communication) in Lucerne, and the other at the Eisenbahnmuseum (Railway Museum) in Munich, Germany. The re-introduction of one of the old steam cars is presently being reconsidered.

Pilatus Bahnen at Kriens owns the Pilatusbahn. Pilatusbahn is the third cog railway to be designated by ASME. The world's first cog railway on Mount Washington (New Hampshire, U.S.A.) was built in 1869 by Sylvester Marsh (with a maximum slope of 37.41 percent, it is also the second steepest gradient in the world). The world's highest cog railway is the Manitou & Pike's Peak Railway (Colorado, U.S.A.), built by SLM for Wilhelm Hildenbrand in 1891 using Roman Abt's system (two parallel, but offset, steel racks with open, upstanding teeth that mesh with the locomotive cogwheels), climbing grades of 25 percent. Both of these railways were designated ASME landmarks in 1976. 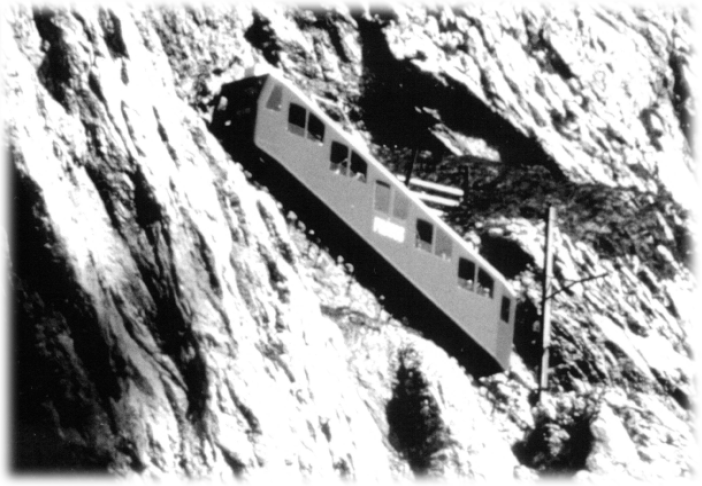 (top) Mountainside view (body) Rail close up Copyright authorization is limited to the promotion of the ASME landmarks program, in most cases, and therefore permission to use these images is restricted.
Image Caption: Pilatusbahn Designated an ASME Historic Mechanical Engineering Landmark on September 21, 2002