Colvin Run Mill is an early 19th century operating gristmill, closely modeled on the principles developed by Oliver Evans (1755-1819). Powered by a waterwheel, the restored mill was probably built on or after 1811 on the site of an older mill. Originally, the site was the property of George Washington, who identified it as ideal for a mill site. The first verifiable documentation of gristmill business was made by Philip Carter, who purchased a 90-acre property about 1811 from William Sheppard, who probably built the original mill based on Evans' design. (Two notes of interest: George Washington had planned to build two mills on his properties and obtained a license for his mill equipment at the nearby Mount Vernon directly from Evans. The mill and the tributary that feeds it (from the Difficult Run) is named for a British officer, corrupted from the name Colville, who was a mentor to Washington, according to one source.)

Having received a patent in 1790 for milling improvements, Oliver Evans' ideas of automation revolutionized the milling process. His book, The Young Mill Wright's and Miller's Guide (1795), detailed how to use elevators, moving belts and screw conveyors to make a milling operation more efficient and profitable. Gravity and waterpower moved grain through the mill. The only labor required of the millwright was to start, stop and adjust the machinery.

In operation the design of the Colvin Run mill allows the owner to load, convey, sift, grind, separate and dry grain into various desired grades with very little manual labor. Each of the four floors of the building served a specific function in turning the grain into flour or cornmeal. Visitors can see an Evans-designed hopper boy (mechanized raker), a grain elevator, wooden Archimedean screws to push the grain through the chute, a bolting chest and shaker assembly (for sifting), and a beam scale for pricing. According to the Society for the Preservation of Old Mills (SPOOM), this mill contains what may be the only operating hopper boy in the United States. (Hopper boys were used to cool and dry flour as it came from the millstones, prior to being sifted through the bolting chest.) 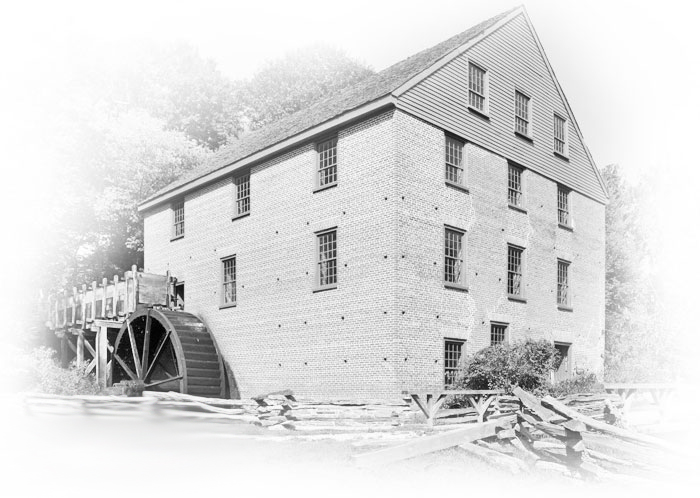 Water from Difficult Run is diverted into the millrace to power the 20-foot overshot waterwheel. The waterwheel produces up to 26 horsepower, turning (outside) at a rate of 10 rpm, resulting in a top grind stone rate of 100 rpm. (Millwright-engineer Clifford Currie designed and built the restored waterwheel, gearing and other hand-crafted fittings.) The gears and machinery are made almost entirely of wood, dating them prior to 1850 before metal fittings commonly replaced wooden ones. Originally the gears were attached to the brick walls of the mill, which probably contributed to the collapse of the west wall at the turn of the 20th century. The cog pit extends the length of the mill along the west wall and the entire gearing apparatus is contained within a husk framework (set on the foundation, unattached to the walls). The greater face gear (10-foot dia.) transmits power to the grinding stations and the other machinery through a series of shafts and gears. Two of these gears, called wallowers (or trundle or lantern gears) take their power directly from the greater face gear. Only the middle grinding station operates at this time. At each grinding station, a stone crane is positioned to lift and move the runner stones for cleaning and sharpening.

Whole grain products from the mill were sold locally and transported to the eastern seaboard, as traffic flowed along the Leesburg Pike. In the 1950s, Leesburg Pike (Virginia Rt. 7) destroyed the original millrace. Access to the water source was restored by building a three-stage electric pumping station along the south side of Rt. 7, which directs the water into an underground millrace that flows beneath the road though a culvert and into a flume.

Changing hands several times, the mill operated commercially until mid-1930s. It was abandoned until 1965 when the Fairfax County Park Authority acquired the property, restored it to the Evans design, and reopened it as a historical site in 1972. In 1973 the site received an Honor Award for Craftsmanship from the Washington Metropolitan Chapter of the American Institute of Architects. Colvin Run Mill is documented by HAER and listed on the National Register of Historic Places. The mill park also includes the miller's house, a country store, post office and blacksmith shop.

Colvin Run Mill offers daily tours, educational programs, special events and outdoor concerts. Families can picnic on the grounds and feed the ducks as well as learn about America's technological roots. The site includes four buildings on 36 acres. The mill operates on a regular schedule: the first and third Sundays of each month, April through October. Guided tours of the mill and miller's house are offered six days a week throughout the year. The mill stands at the bottom of a hill, accessible by a steep rutted path. A videotape is available for those unable to physically tour the building.

Owner location, if different than above

Open from 11 am to 5 pm March through December every day except Tuesdays. For more information, fees and to verify mill operating hours call 703-759-2771.

Colvin Run Mill may be reached by taking Beltway Exit 47A which is Route 7 west for five miles to the park entrance on the right. It's located 5 miles west of Tysons Corner on Leesburg Pike and Colvin Run Road.