The Rocker Shovel Loader 12B provided a significant boost to underground mining productivity by emulating the movements of the human "mucker," the laborer who removed rubble, or "muck," from underground mines, particularly in and narrow mine tunnels. Designed in the late 1930s by Edwin Burt Royle and John Spence Finlay, employees of the Anaconda Mining Company, the first working machine was called an "overshot loader." Both men worked for the North Lilly Mine in Ureka, Utah, in the 1920s and early 1930s. Apparently prior to 1931, their machine had a heavy bucket attached to a rail car by two moveable rocker arms, and the car had air-motor powered wheels to push it into the rubble. In 1931, Joseph Rosenblatt of EIMCO, Salt Lake City, met Royle and Findlay, and shortly thereafter, Royle joined EIMCO as a consultant and designer. Where the first machine had been constructed from discarded Model T parts, EIMCO then developed it into the Model 12B that sold thousands.

The loader was operated by a worker at the side of the machine who could manipulate two controls, one for the wheels and the other for bucket travel. It was run entirely by compressed air. As the machine moved forward, the bucket (with an operating capacity of four to six cubic feet) was capable of removing up to 30 cubic feet of rubble per minute. When the bucket was full, an operator would actuate the bucket drive motor that would move the rubble upward and rearward into a mine car for removal. 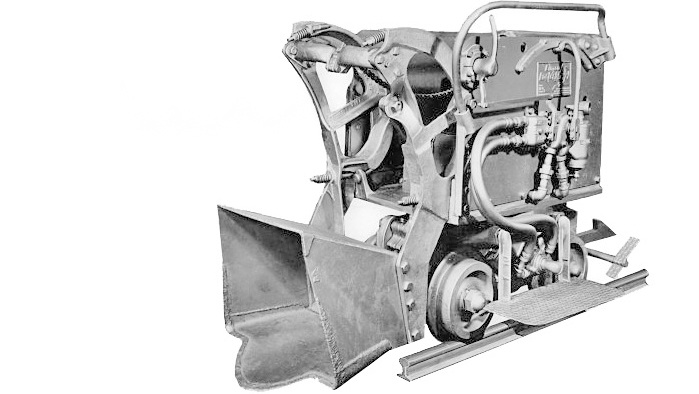 The first patent (no. 2,134,582) was issued Oct. 25, 1938, to Royle and assigned to EIMCO (then Eastern Iron Metals Company). Several patents followed, including a means for side cleanup and then repositioning the bucket for straight rearward discharge motion, which was a feature not include in Royle's and Findlay's first machine.

The Model 12B, which weighs 4,200 pounds (1905 kg.) and requires 60-125 pounds per square inch (413-861 kPa) air pressures, was first introduced in 1938. Air consumption is 250 cubic feet (7.1 cu.m.) per minute. When the bucket is loaded with rubble, the operator actuates the bucket drive motor to exert force on the rocker pull chain, which is attached near the outer end of the rocker arms. The rocker arms roll the bucket upward toward the rear of the machine so that maximizes the initial lift force on the bucket. As the bucket is thrown rearward, its vertical velocity decreases, and its horizontal velocity increases until the rocker arms strike shock-absorbing stops on the frame. When the bucket stops, the contents are flung into an attached mine car. The magnitude of the forces required to lift and throw the contents, repeatedly, is substantial. Cables prevent the rocker arms and frame from coming apart under stress.

Manufacturing rights were licensed to companies in Great Britain, India, South Africa and Japan. Sales expanded beyond the United States into Australia, Canada, Chile, France, Mexico, Spain, and Zambia. By 1969, 29,000 loaders had been sold. The loader in Park City is the same model used in the mine tunnels under Park City, some 1,200 miles (1931 kilometers) approximately. EIMCO Mining Machinery Intenational was sold around 1980 to the Sandvik Group (Sandvik AB), headquartered in Sandviken, Sweden under the name of Tamrock Loaders.