The trainer replicates realistic movements manipulated through the pilot's controls. The basic trainer looks like a cockpit with a control column, control wheel, two footpedals, and various flight and navigation instruments. It sits on four pneumatic bellows that are mounted on a cross frame. Pushing the control column forward, for example, would rotate linkages in the upper half of an air-admission port. This port would reduce the air pressure to the forward two bellows and cause the train to tilt forward. Trainers have the ability to turn, pitch and bank.

Not only was pilot training improved before leaving the ground, but the trainer also emphasized instrument training over visual observation. Pilots would no longer be limited to good-weather, daylight-only flying. Commercial airlines began to use the Link trainer for pilot training, and the US government began purchasing them in 1934, acquiring thousands in preparation for World War II. In the 1950s, the sophistication and diversity in aircraft design made the generalized trainer increasingly obsolete (except for light planes), but the advent of computers revolutionized simulation systems. Later versions of the Link trainer were used to train the Apollo astronauts for the moon landing.

The Link flight trainer located at Roberson center was restored by retired Link employees who had worked on "Blue Boxes," trainers used during World War II by more than 500,000 pilots. It was overhauled in 1972 and moved to its current display by 1973. Its serial number indicates it was built as a C-3, but it had at some point been upgraded with parts appropriate to an ANT model (early World War II). It was initially made fully operational and used for Civil Air Patrol classes. Representative of the technology, it is located within the Edwin A. Link collection, which allows access to the general public alongside other training memorabilia. 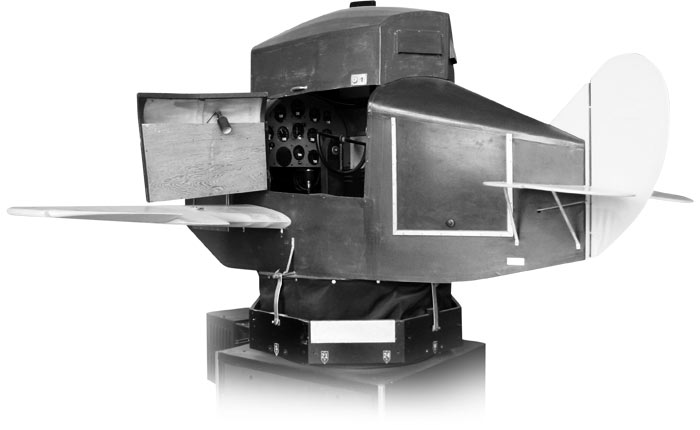