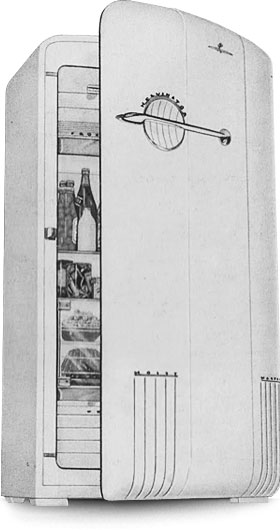 Kelvinator refrigerator, 1948
This collection includes many examples of advances in mechanical refrigeration for residential and commercial applications, dating from about 1890 to 1960. Such devices dramatically improved food storage safety and convenience and set high standards for mechanical reliability. The RRM collection contains products of such pioneers in the refrigeration industry as Frigidaire, Philco, Sunbeam, and Tecumseh. An archive is available to help researchers trace the history of the refrigeration industry. Contributions to this archive include pioneers such as Jim Alter of Harry Alter Catalog and a 1933 interview with Edmund Copeland.

Particularly notable devices in the collection include: Savage Arms ice cream unit (in operating condition): When World War I ended, Savage Arms turned its manufacturing interests to the blossoming industry of refrigeration, which had just started to manufacture preserved ice cream. The museum has a 1926 unit in which the refrigerant does not come in contact with the motor windings, thereby avoiding the problems most refrigerant systems would have shortly thereafter and still have today. The Savage Arms compressor has no seal and no piston or internal moving parts. Instead a mercury column compresses the refrigerant gas as the entire unit rotates. This design was presented as an ASME technical paper in December 1926 by J. G. DeRemer.

A Crosley "Icy Ball" (in operating condition): These refrigerators were made for farms before rural electrification (approximately after World War II). Ammonia and water charged (after regeneration over a kerosene burner), the box temperature of 43 degrees Fahrenheit could be maintained over a 24- to 40-hour period, while making ice cubes. General Electric monitor-top refrigerators (in operating condition): Said to be a refinement of the Audiffren machine, three types are shown that were produced in the 1930s and 1940s.

The first Copeland "Copelametic" compressor: The first 1/2 horsepower Copelamatic compressor to come off the production line was colorimeter tested in the Copeland laboratory and is now on display. The semi-hermetic systems was developed by correcting problems found in the "pollywog" compressor produced in 1932. Limited production then began with 1/6 and 1/5 horsepower single-cylinder compressors. The first production run of 100 Copelamatics was for the Coca-Cola Company of Dayton, Ohio.

A Sunbeam drop-in condensing unit: Sunbeam has what is probably the world's most successful direct-drive unit, with millions made over the years for use in Sears' Coldspot refrigerators. A 1936 Coldspot refrigerator, which originally sold for $98, is in operating condition at the museum.

An early (1934) Crosley "Shelvador" refrigerator (in operating condition): When introduced in the 1930s, leading manufacturers thought putting food in the door of a refrigerator would be "tacky." The convenience, however, provided Crosley with huge sales increases that soon had others trying to get around the patent.

A 1919 Guardian condensing unit: Originally marketed in Detroit under the name "Guardian," this Frigidaire consisted of a two-cylinder seal-type direct-drive compressor covered by a dome containing a water-cooled condenser. The entire unit is made of heavy cast-iron construction and although only 1/4 horsepower, it weighed over 246 pounds. The high- and low-pressure controls were also cast iron. Approximately thirty Guardians were produced at a reported loss of $40,000. The company was bought out by William C. Durant (president of General Motors), at which time the name was changed to Frigidaire. It was then manufactured as a remote unit until 1926.

A 1918 Kelvinator condensing unit: Marking the first generation of household refrigeration condensing units, this remote-type Kelvinator is typical of the kind usually installed in the basement and connected to an evaporator in a converted icebox (in the kitchen). Edmund Copeland with financier Arnold Goss and assistant N.B. Wales began a company initially called the Electro Automatic Refrigeration Corporation. The name was changed to Kelvinator in 1918, in honor of Lord Kelvin (1824-1907), knighted Sir William Thomson for his contributions in thermodynamics.

Some lesser known events in refrigeration are also represented: A 1936 Gunow-type SD household refrigerator: It is the only type of refrigerator that used Carrene as a refrigerant. Carrene ran at atmospheric pressure and with an evaporator vacuum level so low (23 to 26 inches Mercury) that it was not expected to operate efficiently for long. People liked it because they were afraid of household refrigerants, believing that higher pressures would cause explosions. Since refrigerator systems are not subjected to dust and dirt (unlike gasoline engines), however, the Carrene system worked. This refrigerator has been operating efficiently for more than 60 years.