Direct predecessor of the modern automobile.

Siegfried Marcus (1833-1898), a remarkable engineer and manufacturer, lived most of his life and died in Vienna, leaving his most important legacy — an experimental automobile resembling today's modern car and the oldest extant automobile known worldwide. Marcus' second car, built circa 1875 (a more specific date still being investigated by historians), is believed to be the first vehicle powered by a four-cycle engine and the first to use gasoline as a fuel, featuring the first carburetor for a gasoline engine and the first magneto ignition. Marcus' second car, still operable, is now owned by the Austrian Automobile, Motorcycle and Touring Club in Vienna and now on display at the Vienna Technical Museum. The first car was not considered road-worthy and he dismantled it. A third and possibly a fourth car did not survive, making the second his only survivor. Described as "experimental," it never went into production, but it reportedly made a conspicuous appearance the streets of Vienna during its demonstration run.

Much of what is known about Marcus is from a German-language book, Die Automobile des Siegfried Marcus, by Alfred Buberl (Bad Sauerbrunn, Austria: Edition Tau, 1994):

Marcus was born on September 18, 1833, in Malchin, Mecklenburg, northwest of Berlin, in Germany. It is not known whether he had any formal education in engineering, but he apprenticed as a mechanic in Hamburg at the age of 12. Five years later he joined an engineering company that built telegraph lines. In Berlin, he became a technical assistant to Werner von Siemens, the eminent founder of the German electrical industry. In 1852, Marcus moved to Vienna, where he first worked as a technician in the Physical Institute of the Medical School, then as an assistant to Professor Ludwig, an outstanding physiologist. By 1860, he started his own business, a factory for mechanical and electrical equipment, which he operated until the end of his life.

Marcus held about 76 patents in about a dozen countries, including an electric lamp (1877) and an igniter for explosives. He installed the first electric bell in the bedroom of Empress Elisabeth, and he became an instructor in physics to the ill-fated Crown Prince Rudolf. He built and marketed internal combustion engines — first atmospheric engines, wherein the downstroke provides the power output under atmospheric pressure, and then later two-cycle and finally four-cycle engines.

Marcus first started working on a self-propelled vehicle about 1860, making significant contributions in the course of further development. Photographs of his first car, built about 1864, were taken in 1870. The second car — the landmark — was built about 1875 in his factory in Vienna. It was first equipped with a two-cycle engine and later had a four-cycle engine. Buberl identified that the second Marcus car was the first vehicle powered by a four-cycle engine. The first four-cycle engines were built in Munich in 1873 by an Austrian mechanic, Christian Reithmann. (According to Britannica Online, French engineer Alphonse Beau de Rochas established the principle of the four-stroke cycle in 1862. Nikolaus Otto of Germany, however, is popularly credited with applying de Rochas' work to a prototype automobile engine in 1876, three years later than Reithmann.)

Marcus conceived of self-propelled vehicles that would bring passengers to the rapidly developing railway nets. Illuminating gas was the common fuel for stationary internal combustion engines, but inappropriate for moving vehicles. Austrian parts of what is now Poland had begun to produce oil. Refining yielded kerosene, lubricating oil, and also gasoline as an unwanted byproduct. Marcus began experimenting with gasoline, discovering that gasoline could only be used as motor fuel in finely dispersed form when aspirated by the engine.

Marcus started to work on the forerunner of the carburetor in 1864 and was granted his first Austrian privilege (patent) for "an apparatus for the carbonization of atmospheric air," No. 5372/g, issued May 16, 1886. Called the vaporisater, this 1864 patent is proof of his using gasoline as engine fuel, thus the originator of the first gasoline-fueled road vehicle. 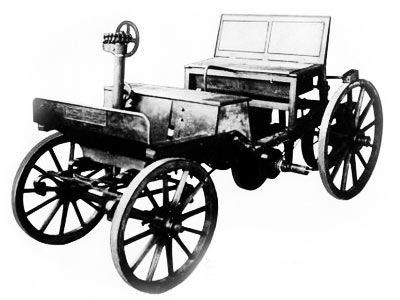