Engines from the collection are among the oldest surviving agricultural steam engines, from 1860 to 1883, showing the conversion to mechanized farming

These engines, built by Cooper & Co., of Mount Vernon are among the oldest surviving agricultural steam engines to show the evolution from the portable, skid-mounted engine (ca. 1860) to the horse-drawn engine (1875), through the self-propelled but horse-guided engine (1875) and finally to the self-propelled, self-steered traction engine (1883). Such engines powered the conversion to mechanized farming, which was a great hallmark of the Industrial Revolution. Cooper built over 15,000 engines between 1853 and 1890 and other companies built thousands more based on the pioneering Cooper designs.

The Coopers were a typical frontier family, which moved to Ohio from Pennsylvania in 1808. Charles and his brother Elias were born shortly thereafter, 1811 and 1813 respectively. They became the founders of Cooper & Co. In 1833, after souring on the coal-mining business, they sold one of their horses for $50 and invested it in an iron-producing foundry in Mount Vernon. Horsepower was provided by a remaining horse named Bessie until 1836 when they installed a small steam engine. The company produced carding machines, special power machinery and plows, changing over time to include conventional slide-valve steam engines, machinery for the Mexican War of 1846-48 and blowing engines for blast furnaces. In the 1860s Cooper hired Julius C. Debes to build Corliss-type engines, who as chief engineer, updated standard product lines for farms, saw mils, cotton gins, grist mills and "anything that takes a revolving shaft," according to a Cooper worker.

Cooper's traction engine of 1875 was a highly successful experiment, sold far and wide in 23 states throughout the country and adopted by other manufacturers, who paid royalties to Cooper (Cooper and Co. was the first to manufacture a farm traction engine in quantity and to market nationwide). The self-propelled traction engine provided excess power to pull the water wagon and separator from field to field, with the help of a single team of horses to steer. The first self-steering traction engine was introduced in 1883. Steam-traction engines remained in operation on US farms until the 1940s. 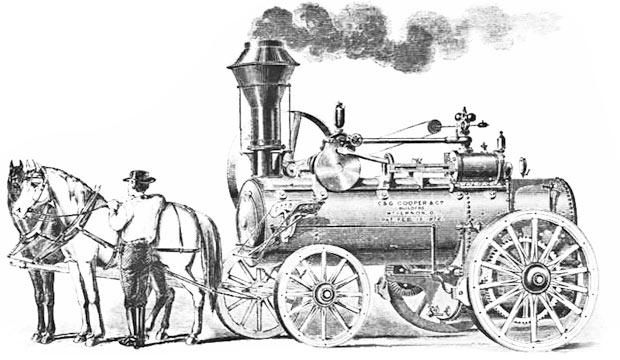 (Nominated by Melvin Helmich with the support of the Central Ohio Section of ASME) ASME's Internal Combustion Engine Division was also present for the ceremony. Mark Ramser (then president) accepted the plaque for the historical society.