The glider was the first heavier-than-air human-carrying aircraft to achieve controlled piloted flight. On his first successful flight, August 28, 1883, John Montgomery soared at about 600 feet. The Montgomery glider's success demonstrated aerodynamic principles and designs fundamental to the modern aircraft.

In 1883, at his family's ranch at Fruitland in Otay Valley, California, John Montgomery (1858 - 1911) observed the natural airfoil shape of birds' wings and incorporated that shape into the development of the Montgomery glider. He designed a parabolic wing section with more curvature toward the front of the wing, giving it a gull-like wing shape and high lift. Montgomery also created the gliders stabilizing and control surfaces at the rear of the fuselage.

The first glider flown was destroyed when the rope caught the gull during an 1883 flight and it crashed. A replica was created by Judy and Howard Ace Campbell, who followed John Montgomery's notes, and is on display at the Hiller Aircraft Museum, at the San Carlos Airport. An exception has been made regarding replicas because of the fundamental significance of the Montgomery glider to an industry largely associated with mechanical engineering.

Since its inception, ASME members have served diverse communities by advancing, disseminating and applying engineering knowledge to improve the quality of life. In the beginning, the community was North America. Today, ASME is a worldwide engineering society focused on technical, educational and research issues. 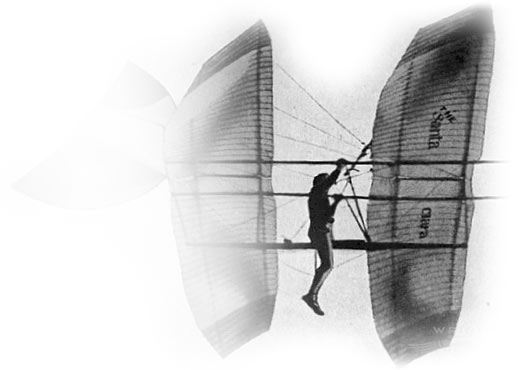 Daniel Maloney descending in Montgomery's glider after being dropped from an altitude of approximately 500 feet (152 meters).

May 1996. Museum relocated in 1998 from Redwood City. Second plaque purchased by Santa Clara University for ME Dept building, given Montgomery's close association with the university.