One of the earliest US water-powered foundry-machine shops, including Knight impulse turbines

This is one of the earliest US foundry-machine shops remaining in operation and one of the few water powered. It was founded by Samuel N. Knight (1838-1913) to manufacture machinery for the gold mines of the Mother Lode region. Knight was one of several inventors experimenting with impulse turbines to exploit the area's abundant high-head water power for driving hoists, ore stamps, and other mining machinery. He patented an efficient water wheel that came to dominate the field prior to the introduction of the Pelton turbine in the mid-1880s. Knight turbines drive some of the machinery of the works.

Today the foundry continues to operate, producing gray iron castings for industry and tourism. The machine shop is still powered by water falling more than 400 feet from the ridge above Sutter Creek. Knight Foundry is also listed on the National Register of Historic Places and has been designated a California Historical Landmark. 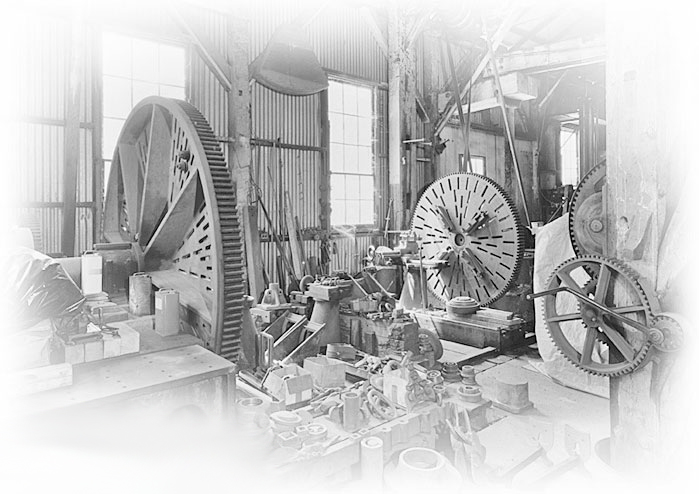 Comments from Visitors/Members:
May, 2005: Knight Foundry featured on History Channel!
In what should be a great boost for the planned major fundraising to come, the History Channel's “Gold Rush Ghost Towns,” part of the channel’s Save Our History series, gave a substantial share of its air time to Knight Foundry. The film crew worked an intensive twelve hour day with Iron Master Russ Johnson, Joe Harralson, of the California State University at Sacramento engineering faculty; and foundry ownerRichard Lyman, to recreate historic activities at the foundry, tracking the production of a cast iron bevel gear. Project Manager Andy Fahrenwald was interviewed by program host Steve Thomas (of This Old House fame) about Knight Foundry’s historic background and plans for the future. For more info: Contact: Andy Fahrenwald, Project Director, andylora@sbcglobal.net, 209-267-5967.

The site was secured for posterity early in 2000 through the generosity of Richard and Melissa Lyman, who purchased the foundry from the Borgh Family Trust. The foundry is now being put back in operation by the Knight Foundry Corporation, a 501 (c) (3) non-profit educational public benefit corporation which will ultimately acquire the site from the Lyman's. The planning and fundraising work leading to the foundry acquisition and resumption of programs was carried out by the Save Knight Foundry Task Force of the Samuel Knight Chapter of the Society for Industrial Archeology directed by then Chapter President Andy Fahrenwald.

Tours have been resumed as of July 1, 2000, on weekends, with tours available by appointment during the week. The foundry number is 209 267 0201. Cast iron production will resume early this year, to be followed by workshops, an array of hands on education programs for young people and extended historic apprenticeship programs in traditional pattern making, machineshop, and foundry work in iron, brass and bronze and blacksmithing.

Knight Foundry was designated an Official Project of the federal Save America's Treasures program in 1999, and through that program subsequently received a $35,000 matching planning grant funded by the J. Paul Getty Fund and a $250,000 matching preservation grant funded by the National Park Service. These two grants will enable the non-profit develop curricula, collection management, a full historic structures report and stabilize the buildings and machinery. Matching funds are being sought to enable this work to go forward. Contributions are tax deductible and should be made to the Knight Foundry Corporation, P. O. Box 1776, Sutter Creek, CA, 95685.