Collection of operational steam engines and auxiliary equipment from the 19th century to the 1940s.

This collection of equipment all of it maintained in operating condition and used for educational purposes was established in 1987. It spans the period from the late 19th century to the 1940s, when steam was the prime motive force for most U.S. industries, including rail and marine transportation.

The collection of about 25 items (mostly stationary steam) includes a locomotive, switcher, and steam tractor: Locomotive #385 Consolidation 2-8-0 designed for fast freight service was built by Baldwin Locomotive Works of Philadelphia in November 1907 for the Southern Railway. Locomotive #7240, an 0-4-0 built by Porter Locomotive Co. in 1938, has a rare "fireless" locomotive with no firebox.

Developed for use in refinery or petrochemical plants where the open fire of conventional locomotives would be a hazard, it is recharged from a stationary steam plant. The "Old Smokey" steam tractor was built by the Frick Company, Waynesboro, Pa., in 1922, has a hand-fired firetube boiler, and chugs along at 2-5 mph. It spent most of its life threshing wheat, baling hay, clearing fields, and rolling streets. 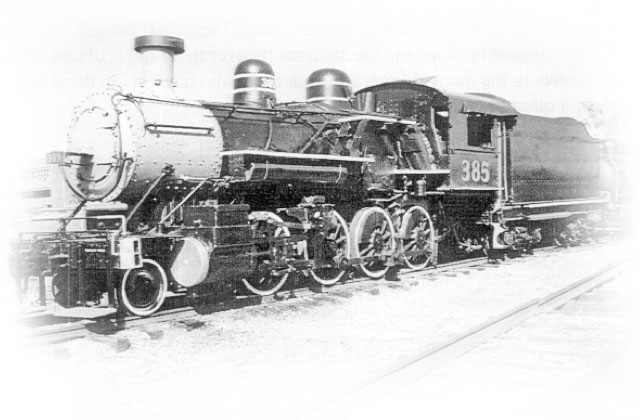 Locomotive #385 built by the Baldwin Locomotive Works of Philadelphia. Pennsylvania in 1907 for the Southern Railway.

By appointment with instructor Frank Volpesek