One of two surviving automated machines that founded the bottling industry

Although bottled carbonated beverages were popular by the 1880s, sealing the bottle was a constant problem. Most "stoppers" were of metal and intended for reuse. None sealed adequately, and contact with the cap often contaminated the drink.

In 1892 (Feb 2), William Painter (1838-1906) patented a cheap, single-use metallic cap, crimped over a lip formed on the bottle neck and lined with a thin cork wafer that both formed a leakproof seal and separated drink and metal. Soon thereafter, he patented a machine that filled the bottle simultaneously with syrup and carbonated water, then applied the cap. The two inventions commercially developed by Painter's Crown Cork & Seal Co. were the foundation of today's vast bottling industry. In 1898 Painter claimed a worker could fill and cap eight bottles a minute, although the average was half that. By 1902, Painter had introduced the eight- head automatic electric Crown bottling and capping machine with a capacity of 60 to 100 bottles a minute. Painter, who was an ASME member, had 85 patents.

There are only a few Crown soda machines known to exist today, two were restored for the centennial celebration and are on display in the company lobby of Crown Cork & Seal. One has recently been loaned to the Coca-Cola Company museum in Atlanta.

The second plaque was purchased by FMC Food Processing Systems Division and is located at 2300 Industrial Avenue. 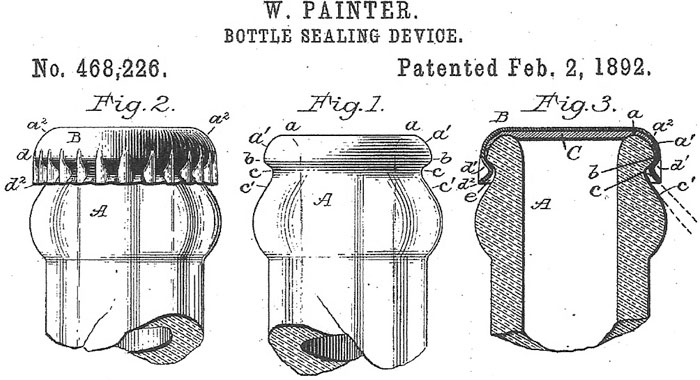