Unique cooling system for the testing of aerospace engines

The Advanced Engine Test Facility was built in 1964, three years after President John F. Kennedy committed the United States to world leadership in aeronautical science. Conceived and designed by Wernher von Braun, the first director of the Marshall Space Flight Center, this facility was used to perform static tests on the booster of the Saturn V rocket, which launched Apollo 11 to the moon on July 16, 1969.

The stand has four concrete legs, each four feet thick and rising 144 feet to a steel superstructure supporting a 200-ton crane. Including the crane boom, the facility is 400 feet in height. In the many tests conducted at the facility, the powerful booster stage of the three-stage Saturn V was positioned within the steel framework and fired. More than 850 engine parameters, including thrust and fuel and oxidizer flows, were monitored on instruments located in the hollow legs of the test facility.

In addition to high structural stability able to withstand 7.5 million pounds of engine thrust, the NASA facility is unique for its cooling system, a 1,900-ton flame deflector. Built outside the test stand, the giant steel bucket was moved on wheels to its position beneath the thrust load platform. During rocket tests, some 320,000 gallons of water was forced through the deflector'/s more than 387,000 holes each minute. Modified and updated three separate times since Apollo, the Advanced Engine Test Facility is used today for full-scale testing on the main engine of the US space shuttle. 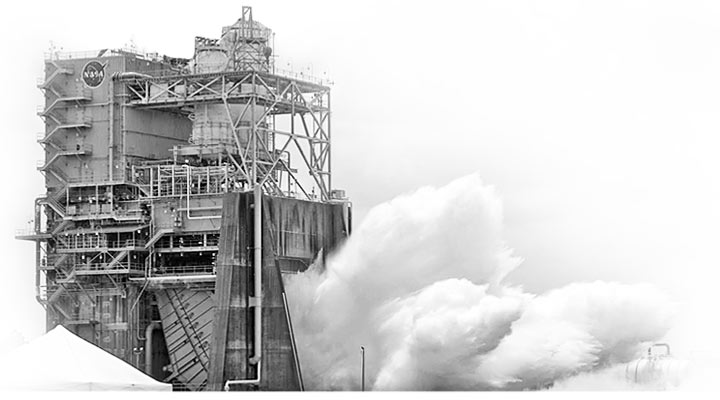