The Q-R-S marking piano was one of the first machines to produce master rolls for player pianos by recording actual performances. Other roll recording devices were developed within this time frame, but as far as known, the Q-R-S is the only example still in existence and in service. The marking piano made it possible to capture live performances--including those of Igor Stravinsky, George Gershwin, and Duke Ellington--and thus preserve keyboard artistry of many artists, incidentally documenting the history of pre-radio 20th century American popular music. The first "hand-played" roll that QRS released was Pretty Baby by ragtime pianist Charlie Straight.

Player pianos provided home entertainment to millions of Americans from 1900 to 1930 and were the first widely successful consumer device to use binary encodement of data in its software, configured as piano rolls. Prior to the development of recording devices, sheet music was transcribed to master rolls by hand.

Invented by Melville Clark (ca. 1850-1918), founder of QRS and piano player designer from Chicago, the Q-R-S recording machine is a modified piano, with each of its 88 keys pneumatically connected to a stylus in the recorder. These styli are suspended horizontally above a roll paper at a point where it passes over a carbon cylinder. When a key is depressed, the corresponding pneumatic collapses, pressing the stylus on the moving roll paper as it passes over the carbon cylinder, which leaves a mark on the underside. As an artist plays, each stylus marks its note on a roll of paper being pulled over a cylinder covered with carbon paper, faithfully recording the performance. Upon completion of the recording, the carbon marks are cut out and a production master is made from this roll by pneumato-electrical means.

This marking piano, in particular, originally saw service from 1912 to 1931, when the Depression and declining roll sales made alternate means of creating master rolls more economical. Following a player piano revival in the 1960s that increased demand for rolls, this machine was restored and refinished in 1972 (at which time the roll drive motor was replaced). Artists who have recorded on the restored machine include Liberace, Peter Nero, Ferrante & Teicher, George Shearing, Roger Williams, and Eubie Blake. 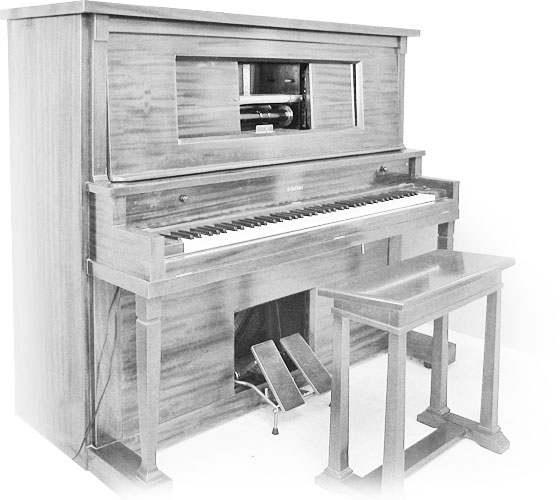 Demonstrations twice a day Mon-Fri 10am and 2pm

Last surveyed in 1992 by Mike Melchioris