This, the first Curtis vertical turbine built, was constructed by the General Electric Co. for the Newport & Fall River Street Railway Co. It operated in the Newport, R.I., generating station until June 1927. It was transferred to the Harding Street Station of the Indianapolis Power & Light Co. for display and later moved to the company's E.W. Stout Station.

In 1896 Charles G. Curtis (1860-1953) patented two turbine concepts that led to the commercial production of low-cost, single-cylinder turbines to provide the electricity so much in demand in the United States during the early 1900s. The Curtis vertical steam turbine enabled the electric power supply system to grow at an unprecedented rate during the first two decades of the century.

From 1897 to 1901, GE tested horizontal versions. In 1901 a 5000-kW production turbine was built for the GE Schenectady plant (see NL 06). Under designer and developer W.L.R. Emmet (1859-1941), the vertical configuration soon replaced the horizontal and production began in February 1903. Because there is no record of a prototype machine being built for shop testing, this may have been the first vertical turbine completed, in addition to being the first machine shipped for commercial use.

The vertical configuration was abandoned between 1908 and 1913 as turbine speeds increased from the 500 rpm to 1800 rpm. 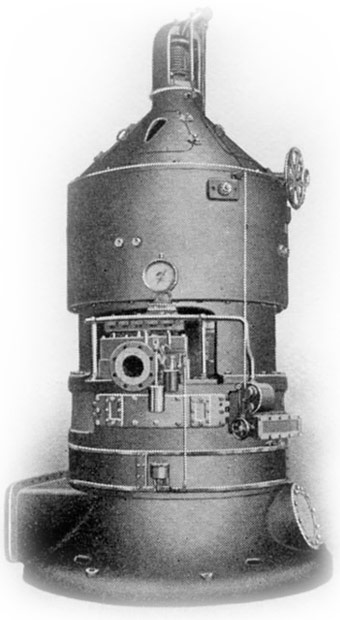