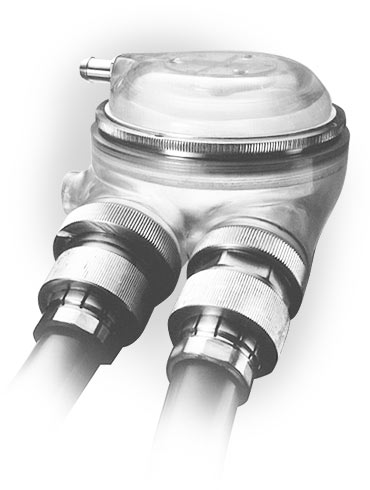 ​A model has been reconstructed from early parts for display at the Medical Center.

This is the first extremely smooth, surgically implantable, seam-free pulsatile blood pump to receive widespread clinical use. In its use in more than 250 patients, it has been responsible for saving numerous lives. When used as a bridge to transplant, the pump has a success rate greater than 90 percent. There has never been a device-failure-related fatality of any of these patients. A successful heart-assist pump could save an estimated fifteen thousand individuals annually.

The pump pioneered the application of fluid mechanics principles to blood pump development and the use of segmented polyurethane as the blood contacting material. An interdisciplinary group, including both medical and engineering colleges at Penn State, designed the pump using fundamental engineering principles and problem solving techniques. William S. Pierce and James H. Donachy received US patent #4,222,127 on September 16, 1980. Other contributors include co-developers Gerson Rosenberg, John A. Brighton, Winfred M. Phillips.

Development began in the early 1970s and testing began in 1973. US Food and Drug Administration approval was granted in 1980, and by 1984, the Penn State heart-assist pump was in widespread use. The design principles developed for this pump are being applied to more advanced devices. With minor modifications, two heart-assist pumps served as a total artificial heart October 18, 1985. The longest surviving patient with the Penn State heart has lived 390 days, as of 1990.