The Hanford B-Reactor was the first plutonium production reactor to be placed in operation. Its success made possible the subsequent development of atomic energy. The research work, engineering, and planning required to make the reactor operate is one of our most advanced achievements. Much of the reactor core, cooling system, shielding, and auxiliary systems were designed by mechanical engineers.

Located near the Columbia River, with a sure electric power source from the Bonneville and Coulee Dams, the Hanford B reactor was a graphite-moderated, water-cooled reactor, designed to operate at 250 million watts. It was loaded in September of 1944 under the personal charge of Enrico Fermi and went critical on September 26 that year.

During World War II, Hanford was the site for fuel fabrication plants and chemical separation facilities. B reactor plutonium was used in world's first nuclear explosion at the Trinity Test in Alamogordo, N.M., in 1945, and also in the bomb dropped on Nagasaki, Japan, August 9 of that year, prior to the end of World War II. B Reactor tritium was used in the world's first test detonation of a hydrogen bomb on Bikini Atoll in the South Pacific in 1952.

The plant was retired in 1968. Environmental restoration began in 1994 under the US Dept. of Energy-Richland Operations Office and managed by Bechtel Hanford Inc. for cleanup along the Columbia River corridor and on Hanford's Central Plateau.

UPDATE: On Aug. 19, 2008 the Hanford B Reactor was designated a National Historic Landmark by the U.S. Department of Interior's National Park Service. This Historic Mechanical Engineering Landmark is best described as the world's first full-scale plutonium production reactor. Being a government installation, it was never in "commercial" service. 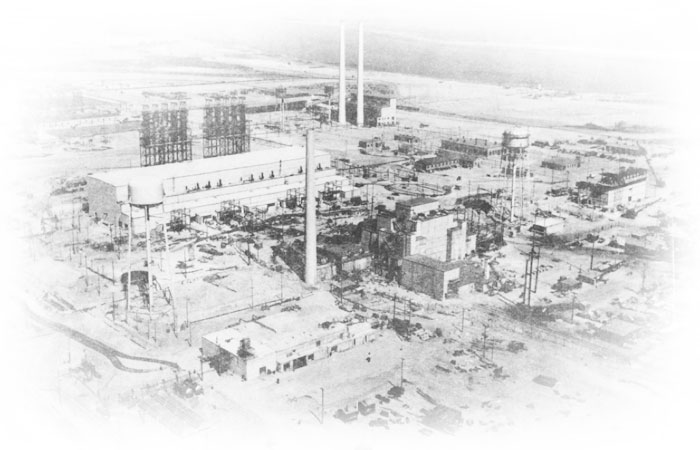 Photo of Hanford B Reactor During Construction