This simple-cycle gas turbine was the first successful electric power-generating machine to go into commercial operation. It was designed and constructed by A. B. Brown Boveri in Baden, Switzerland, and installed in 1939 in the municipal power station in Neuchâtel, Switzerland.

Malleable iron founding is one of the oldest national industries, begun in the United States by Seth Boyden (1788-1870) in the 1820s. Foundries sprung up throughout the east, casting saddlery hardware, carriage parts, and agricultural implements. The railroads became the largest customer for malleable iron castings around the turn of the century, and eventually automobile manufacturers used it for rear axle housings, differential cases, hubs, and so on.

Brown-Boveri had produced numerous forerunners in the 1930s, especially several machines that were used as superchargers for the Houdry catalytic cracking process and for the supercharged Velox boilers. (A Houdry unit was installed at Sun Oil Marcus Hook Refinery in Pennsylvania in 1936.) The gas turbine for Neuchâtel used improved turbine blading and tapered rotor blades to reduce centrifugal stress.

The turbine had a 4-megawatt power output at the generator terminals and an efficiency of 17.4 percent. Professor Aurel Stodola, known internationally for his work with steam and gas turbine design, supervised acceptance tests at the time of installation.

Originally designated in 1988, the Gas Turbine was still in operation. It remained in service until 2002 when it was retired. In 2005, ALSTOM, a successor company to Brown Boveri—the original manufacturer—decided to preserve and restore the landmark. ALSTOM acquired the landmark from the owner, Service Industriels de la Ville de Neuchâtel, relocated it to its factory in Birr, Switzerland, restored it and put in on public display in a building especially built to house and preserve the landmark. 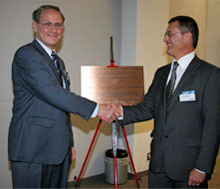 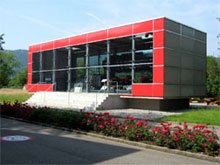 The Neuchâtel Gas Turbine after its relocation to Birr, Switzerland, in its impressive new home built by ALSTOM. 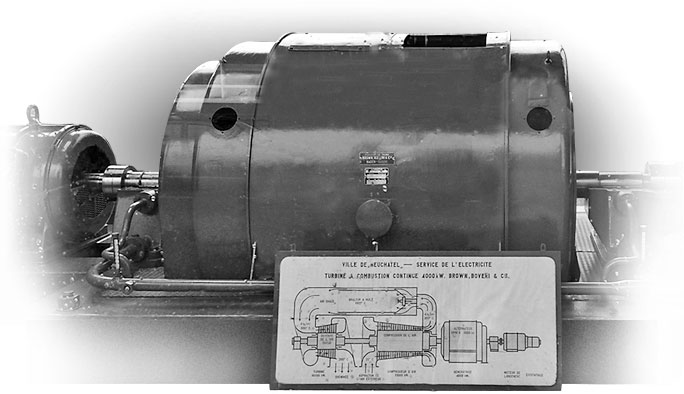