Fossil Creek meanders ten miles to the Verde River, dropping some 1,600 feet during its course and, at the turn of the century, enticed miners in the copper-rich Irving area to use a new technology -- hydroelectric power. A seven-mile series of flumes brings the water from a dam below Fossil Spring to the Irving Plant and then to Stehr Lake. The water continues its plunge down to the penstocks of the Childs Plant near the Verde River.

The Childs Plant, which included three Pelton-wheel generators at 9,000 horsepower (6,700 kilowatts), was completed in 1909, followed by the Irving Plant with a single Allis-Chalmers' Francis turbine at 2,100 horsepower (1,560 kilowatts), completed in 1916. Mule teams carried construction materials up the mountainous terrain, necessitating innovative use of steel towers rather than wooden transmission poles. While small by present-day standards, the plants once took care of the entire electric requirements of Yavapai County. A seventy-five mile transmission line was constructed in 1919 from Sycamore to Phoenix to deliver 2,000 kilowatts of power. In the mid-1920s, this line delivered 70 percent of all electricity used in Phoenix, then a city of forty-four thousand. 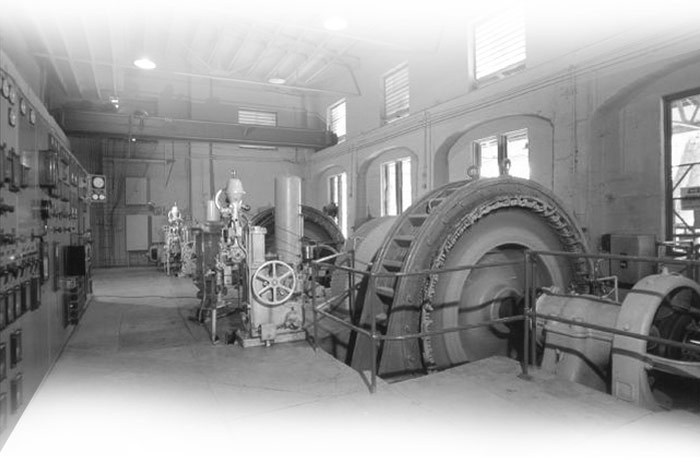 At Childs, on stone monument outside plant office

Plaque is dispayed in a prominent place at or near the actual equipment. The Childs-Irving Hydro plants are in a very remote location down an unpaved road that is almost inaccessible in bad weather. The ceremony had taken place at the corporate headquarters in Phoenix because it was winter and access was difficult.