The load in a Kingsbury bearing is carried by a wedge-shaped oil film formed between the shaft thrust-collar and a series of stationary pivoted pads or segments. This results in an extremely low coefficient of friction and negligible bearing wear.

Albert Kingsbury (1863-1944) developed the principle in the course of bearing and lubrication investigations commencing in 1888 while a student. His first experimental bearing was tested in 1904. He filed for a patent in 1907, and it was granted in 1910. The first Kingsbury bearing in hydroelectric service, one of its major applications, was installed here in 1912. It remains in full use today. Kingsbury thrust and journal bearings have been applied to large machinery of all types the world over.

Australian A. G. M. Michell simultaneously and independently invented a bearing on the same principle. 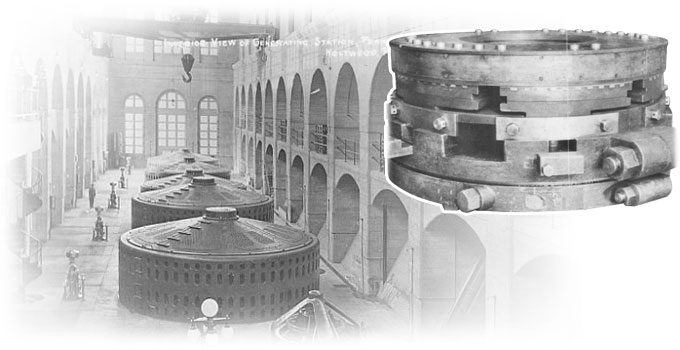 By appointment, accessible only during shutdown.

Item has survived, but is not on display.