This oldest surviving rotative engine was built by Boulton and Watt in 1785 for the London Brewery of Samuel Whitbread to drive the malt crushing mill. It appears first on a drawing dated November 1784 as a single-acting engine displaying the parallel motion and sun-and-planet gear that enable shaft rotation. Conversion to double action in 1795 doubled the power output. The iron beam and flyball governor were also later modifications. The engine served the brewery for 102 years, until 1887, when Archibald Liversidge, a museum trustee visiting in London, was presented with the engine and had it sent to Sydney in 1888, where it has now been restored to working condition by the Power House Museum.

With a speed of 20 revolutions per minute and a mean effective pressure of 10 pounds per square inch, the 25-inch piston of 6-feet stroke would have produced about 35 horsepower in its prime. 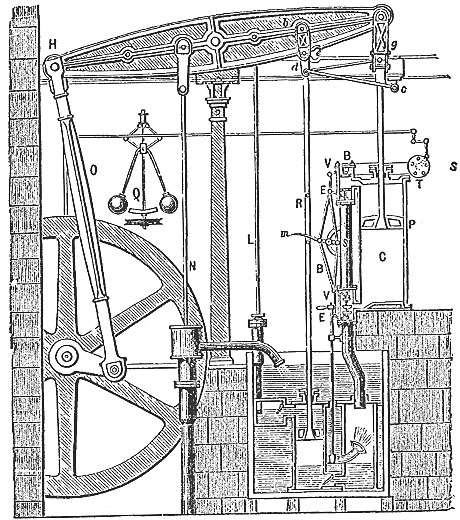 Feedback, Sept. 2002: Visitors will find an illustrated 8-page brochure about the Boulton and Watt engine in the Museum shop. A copy is displayed with the exhibit labels to alert visitors to the fact that it is available. There are also postcards in the shop. Publication-quality images can be purchased on written application to the Museum, and visitors are allowed to take their own photos as long as they agree to acknowledge the Museum if they publish them. The exhibit on the Maudslay engine aims to showcase Maudslay as the 'father of British engineering' via Whitworth and Nasmyth. The museum, however, has obtained a Whitworth lathe recently and plans are to include it in a revamped exhibition.

Visitor, July 2000: Being aware of the Watt engine at the PHM, I paid a visit a few weeks ago to see if I could pick up a post card or a transparency of the engine and to see if there were any pamphlets available.

I am very surprised that the Boulton and Watt Engine in the Power House Museum is not more publicised. Given the historical significance of this engine, I was amazed that there was apparently no 'promotional literature' pictures/ transparencies of the engine available at the 'Museum Shop.' In this respect the PHM shop compares very poorly with the Australian Museum.

As a student of the Industrial Revolution, I was delighted to see a Maudsley engine on display - in the 'Power Hall' once again - bare minimum of data, no photos/transparencies available in the 'shop.' Does the Museum realise that Maudseley was one of the 'giants' of the Industrial Revoution? The Museum's Maudslay engine should be a prize exhibit.

In the same hall I also saw a boxed set of Whitworth taps and dies...Considering that Whitworth's standardisation of screw threads played a very significant role in 19th industrialisation, the poor little 'box of tricks' was looking very forelorn in its cabinet...I really do think that the Powerhouse Museum has gone overboard on 'whizz bangery' at the expense of not REALLY displaying in the context of what is, in many instances 'world class' significance.

Owner or plaque location, if different than above

The Powerhouse Museum is currently open from 10:00am - 5:00pm every day except Christmas Day.