This 350-horsepower Corliss type steam engine is an example of a typical late nineteenth century steam engine. The essential feature of Corliss type engines is the valves that admit steam to and exhaust it from the cylinder. The Corliss valve gear made the engine extremely efficient in steam consumption and was the most efficient system for controlling low to medium speed engines.

This particular engine operated for more than eighty years, having been retired not by age but over concern for stack emissions by the U.S. Environmental Protection Agency. The engine was built by the William A. Harris steam engine company of Providence, Rhode Island (at one time the world center for steam engine manufacturing), and was first used at Atlanta's Cotton States and International Exposition of 1895, Piedmont Park, Atlanta.

The engine was delivered on May 16, 1898, to the Exposition Cotton Mills in Atlanta and was sold to Randall Brothers between 1898 and 1910 for use in their woodworking plant. In service more than seventy five years, it was used to drive an electric generator and power machinery through overhead line shafting. The steam boilers were capable of burning wood, coal, or gas until converted to fuel oil in the 1970s. Designated by the Atlanta Section. 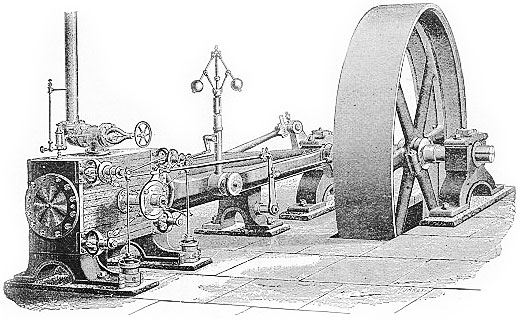 The steam engine was retired in 1977 due to environmental concerns regarding the boiler smokestacks. The boilers were converted from wood chips to oil, which proved too expensive and unreliably supplied. In 1977 the plant switched to grid-supplied electricity.

The steam engine remains in its original location in the plant and is available to the public. The boilers occasionally are fired up for demonstration to show the operation of a classic Corliss engine.