On May 3-5, 2017, ASME will host the 6th annual Verification and Validation (V&V) Symposium in Las Vegas, NV. The symposium is the premier forum for international participants to discuss topics dedicated entirely to the emerging field of verification, validation, and uncertainty quantification of computer modeling and simulations. In addition, ASME’s V&V standards development committees will meet and two training seminars will be held at the symposium.

ASME’s Verification and Validation (V&V) Standards Committee is developing a new V&V Committee on Computational Modeling in Energy Systems and Applications (V&V 60). Specific areas of focus are currently being identified and prioritized, including Big Data/analytics; energy sources to be covered; integrity and risk management; and modeling and simulation of high temperature/pressure environments. ASME is currently soliciting subject matter experts and affected stakeholders to help support the effort.

For more information on the Symposium or the new V&V 60 committee, contact Ryan Crane (+1.212.591.7004) or visit the Verification and Validation Symposium website.

On October 21, 2016, ASME’s Y14 Engineering Product Definition and Related Documentation Practices Standards Committee approved the creation of a new Committee on Universal Direction and Load Indicators (Subcommittee 48). This subcommittee will be tasked with the standardization of methods to unambiguously define and specify directions, directional requirements, loads, and loading requirements in product definition data sets. The standardized specifications for directions and loads will aid the implementation of geometric dimensioning and tolerancing for additive manufacturing.

In addition, ASME’s Advanced Manufacturing Standards Committee is developing a new Committee on Monitoring, Diagnostics, and Prognostics Guidelines to Support Health Management and Control of Manufacturing Systems. This committee will be tasked with developing guidelines that describe and promote advanced monitoring, diagnostic and prognostic technologies, along with ways of verifying and validating their performance. These guidelines would allow for the promotion of more effective decision making with respect to updating control and maintenance strategies within a manufacturing facility. 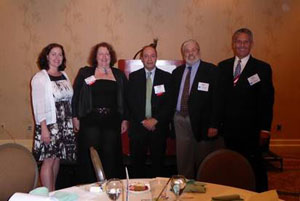 ASME leadership and B30 members pose at the B30 dinner celebration. Pictured are K. Hyam, P. Reddington, W. Berger, L. Means, B. Closson.
On September 20, 2016, in celebration of the 100th anniversary of the first edition of what has evolved into the B30 Safety Standards for Cableways, Cranes, Derricks, Hoists, Hooks, Jacks, and Slings, ASME held a special dinner recognizing the collective efforts of the many volunteers and staff members who have been instrumental in enhancing crane safety around the world. Organized in conjunction with the B30 Standards Week held in Clearwater, Florida, the dinner was attended by over 120 guests. At the dinner, William Berger, ASME Managing Director of Standards & Certification, expressed appreciation on behalf of ASME to the volunteers for their contributions and shared his recollections from his former days as secretary of the B30 Standards Committee. 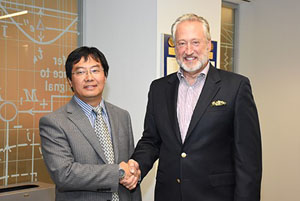 Z. Min, General Director of the China Chemical Industry Equipment Association and T. Loughlin, ASME Executive Director
On October 17, 2016, ASME met with a delegation from the China Chemical Industry Equipment Association (CCIEA) at its New York headquarters. At the meeting the two organizations signed a memorandum of understanding (MOU) that formalized the relationship the groups have maintained for nearly 10 years. The agreement, which was signed by ASME Executive Director Thomas Loughlin and CCIEA’s Director General Zhao Min, covers the promotion of information exchange, cooperation in standards development and training, standards committee participation, and potential cooperation in workshops and seminars with a special focus on conformity assessment and personnel certification. 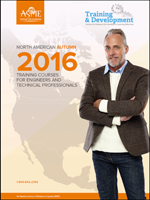 Interested in broadening your technical know-how? Download the latest ASME Training & Development course catalogue or the Autumn 2016 course calendar – or visit us on the web.

SPOTLIGHT ON – HONORS AND AWARDS

Each year, ASME Standards & Certification issues numerous honors and awards to recognize the contribution and service of individuals involved with its standards development activities. Nominations for 2017 awards are currently open. A summary of award information is included below. Please refer to each award for submission and deadline information.

Dedicated Service Awards - honors dedicated voluntary service to the Society marked by outstanding performance, demonstrated effective leadership, prolonged and committed service, devotion, enthusiasm and faithfulness. Nomination is open to any individual with at least 10 years of service on a standards committee, board, or council.

Melvin R. Green Codes and Standards Medal – recognizes outstanding contributions by an individual to the development of documents, objects or devices used in ASME programs of technical codification, standardization and certification. This award is sponsored by the Council on Standards and Certification.

Patrick J. Higgins Medal – recognizes an individual who has significantly contributed to the enhancement of the broad fields of standardization and testing through the development and promotion of codes and standards or conformity assessment programs. This award is sponsored by the Board on Standardization and Testing.

J. Hall Taylor Medal – recognizes an individual who has significantly contributed to the enhancement of the broad fields of piping and pressure vessels through the development and promotion of codes and standards or conformity assessment programs. The award is sponsored by the Board on Pressure Technology Codes and Standards.

Certificate of Appreciation - issued to selected individuals for outstanding leadership and/or significant service in the development of codes and standards. Requires committee recommendation to the cognizant board.

Certificate of Achievement - available annually to each standards committee to recognize significant personal achievement in the development and promulgation of codes or standards under the committee’s jurisdiction. Nominations require approval by 90% of the membership of the consensus committee and is then subject to approval by the cognizant board for action on behalf of the Council on Standards and Certification.

Certificate of Acclamation - available annually to each standards committee for recognition of excellence in the development of a specific work product (e.g. new document, major revision) and are presented to an individual or a small group of individuals most responsible for the work product. The standards committee Chair may make nominations to the cognizant board for the issuance of Certificates of Acclamation.